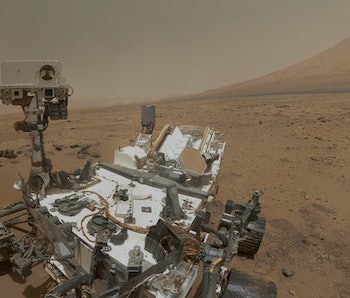 Five years ago, the Curiosity rover embarked on a journey to explore one of our closest planetary neighbors, Mars. The intrepid explorer blasted off into space atop a United Launch Alliance Atlas V rocket on November 26, 2011. After surviving a 253-day journey, and a harrowing seven minutes of terror, the car-sized rover touched down on the red planet’s surface to help scientists uncover clues about the planet’s history. Here’s a look at some of its top discoveries.

Earlier this month, Curiosity surprised scientists when it stumbled upon on interesting find: a small metallic meteorite subsequently dubbed “Egg Rock”. While meteorites on Mars are common, this one’s smooth surface is not. The data collected will provide details about how meteorites are affected when exposed to the Martian environment for long periods of time, which fits with Curiosity’s newest science goal: to investigate how ancient environmental conditions changed over time.

Curiosity data shows that Mars wasn’t always a barren wasteland. In the past, the red planet was geologically active, featuring a host of volcanoes, which gave Mars a major facelift forever changing the surface of the planet.

Curiosity discovered mudstone in Gale Crater which indicates that at some point in its history, a large standing lake existed. This evidence supported an earlier hypothesis that the base of Mars’s Mount Sharp was formed by layers of sediment deposited in a lake. This discovery bolsters the chance that scientists may one day find evidence of life.

Over the years, Curiosity has provided us with a rover-eye-view of the red planet, and as the robotic explorer traversed the Martian surface, we were treated to spectacular views that rivaled what we would find here on Earth — namely the Murray Buttes. These eroded sandstone formation provide intriguing insight into Martian geology, telling a story of how the landscape evolved over time.

Mars Once Had an Oxygen-Rich Atmosphere

Mars used to have a lot more oxygen than scientists thought. Curiosity’s ChemCam instrument detected high levels of manganese oxide in rocks that lined the Kimberly region of Gale Crater. This evidence supports the idea that free oxygen once flowed across the Martian surface, during a period when the planet was warmer and its surface was teeming with vast lakes and oceans.