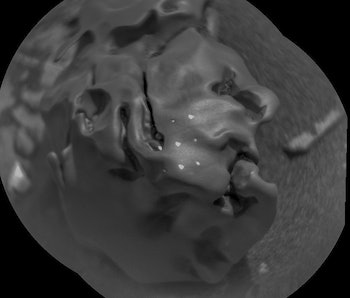 NASA’s Curiosity rover just made quite the surprising find: a little metallic meteorite scientists are calling “Egg Rock.” The rover took a shot of the bugger as it made its currently climb up the steep inclines of Mount Sharp (Aeolis Mons) — the site that helped scientists discover the presence of liquid water on the surface of the Red Planet.

Arizona State University researchers studying photos taken by Curiosity’s ChemCam Remote Micro-Imager think the meteorite is made of nickel-iron, and probably comes from the core of a planetesimal (a small body of cosmic rock and dust that’s on its way to forming into an actual planet) zipping around in the asteroid belt.

Meteorites crashing into the Martian surface are far from rare. But Egg Rock is quite the strange find. Unlike most meteorites, it has a fine and smooth surface, and contains a few grooves that pierce deep into the rock — which could be signs of weathering patterns during the rock’s molten hot infancy.

We’re a bit lucky that Mars has such a thin atmosphere. Rocks that unwittingly make their descent head first into the planet won’t get scorched up the way they would entering Earth’s atmosphere. Since they retain more of their structure, scientists are in a prime position to study Martian meteorites to learn more about the planetary formation, the origins of the solar system, and the composition of structures from much farther away.

Metallic asteroids in particular are much better able to survive atmospheric entry. This might prove very useful to future astronauts who need to source metals from the planet itself to use as construction materials.