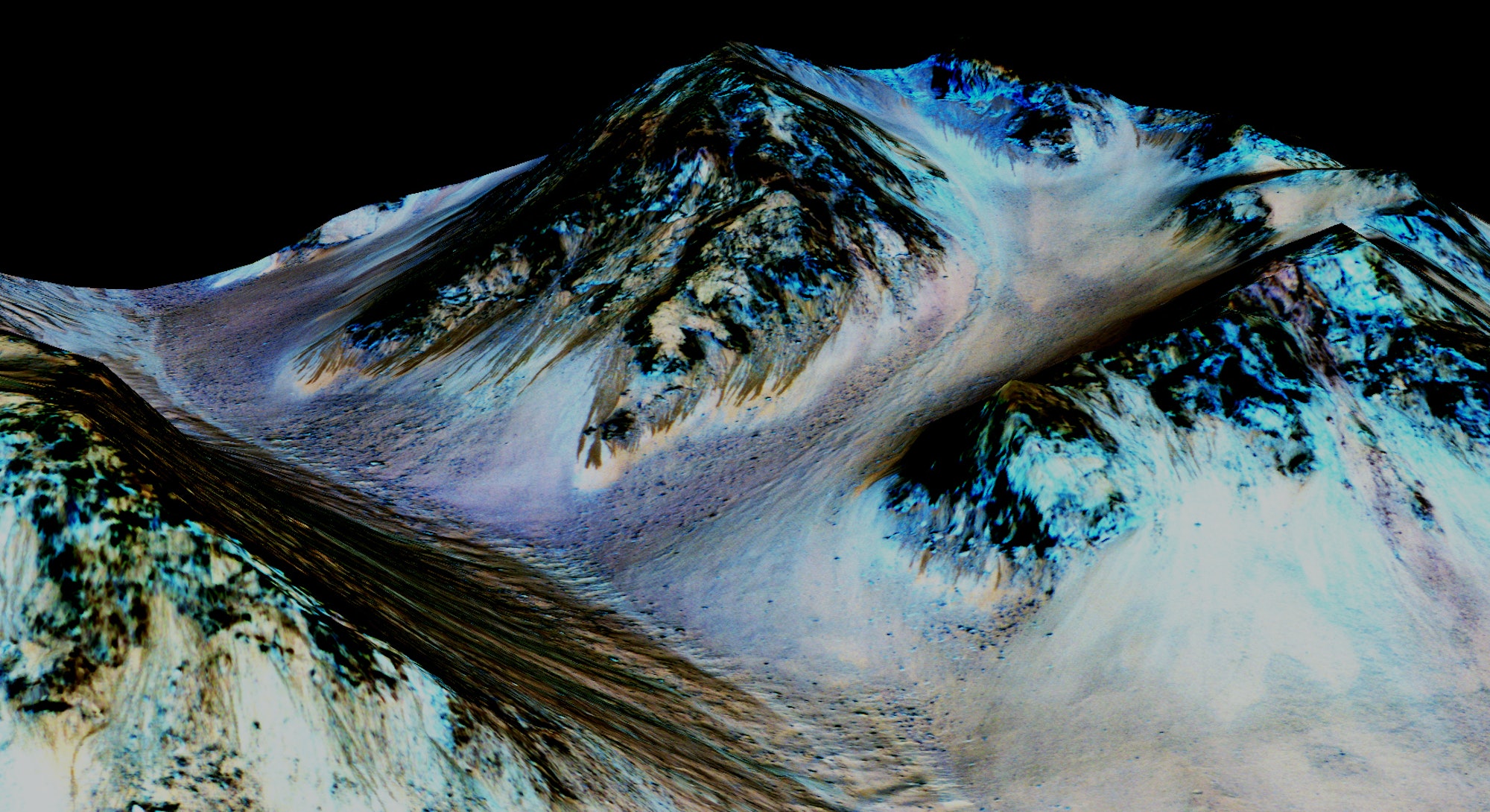 One year ago this week, NASA announced the discovery of liquid water on Mars, confirming speculation and irrevocably changing the way scientists and the public alike perceive the red planet. It was one of the biggest scientific announcements of the year.

The consequences of the discovery are only now sinking in. One year later, we’re less inclined to refer to Mars as an exotic, distant rock painted red — and more like a future second home for humanity, because suddenly we know Mars to be more Earth-like than ever before.

The initial research was about five years in the making before NASA’s announcement last September. In 2010, University of Arizona planetary geography researcher Alfred McEwen and graduate student Lujendra Ojha were the first to notice something strange creeping out in the middle of images taken by NASA’s Mars Reconnaissance Orbiter: dark streaks along slopes and gullies in the Martian landscape that appeared in the spring, grew in the summer, and disappeared when fall arrived. McEwan and Ojha published a study about these recurring slope lineae sites in 2011, and it caused quite a stir in the planetary science community.

The RSL had “all the trappings of a [water] flow feature,” Michael Meyer, the lead scientist for NASA’s Mars Exploration Program and one of the scientists who participated in the September 2015 announcement, told Inverse recently. “But it wasn’t obvious that it was water.”

McEwen and Ojha would publish a paper in 2011 detailing their findings and their suspicions that “water play some role,” McEwen tells Inverse, “but exactly what role was not clear then.”

As more data started coming in, one huge mystery began to get bigger and bigger: if the RSL was caused by water, what was the source? The dark streaks weren’t forming in a site that would obviously be hosting some kind of aquifer.

Ojha and McEwen would continue their research, documenting more RSL sites in other locations, and seeing how they are affected by temperature and topographic features.

What they ended up publishing last was a study about the “detection of hydrated salts at some of the RSL sites,” says McEwen. This is important: “This was not a detection of liquid water,” he emphasizes, “but supports the idea that water plays some role in this activity.”

Meyer explains that hydrated minerals are a signature of hydrogen, which essentially equates to water. So while water itself isn’t directly imaged, we now have a definitive explanation for what is causing the RSL to appear and disappear: liquid water.

There are still questions about exactly where the water is coming from the detection of hydrated salts simply offers an explanation for why we’re seeing such an unusual flow behavior. The findings also mean the water is pretty briny. “It has to have a lot of salt in it to be able to flow at these low temperatures,” says Meyer.

“Nevertheless, water is available on Mars at that latitude,” he says.

There are two big reasons why liquid water on Mars is such a big deal. The first is that, in the world of astrobiology, water is essential for the rise and evolution of life as we know it. We know Mars was once teeming with lakes and oceans, which means there might have been life on the planet. The presence of liquid water on the surface of the planet means life might exist. Mars is hellish, but so are some habitats on Earth, and life has managed to find a way to survive in these areas. It’s not hard to imagine Martian lifeforms evolving the ability to survive extremely salty waters.

The other reason has to do with us humans: When we finally travel to the red planet and colonize it — which will likely happen one way or another — water will be essential. And it’s not really feasible for us to ship it all the way from Earth.

For a while, the best hopes for humans to collect water on Mars will be either miraculously stumbling on a subsurface ocean, or melting down mined chunks of ice from the poles. Either scenario (but especially the latter) will be very energy-intensive and dangerous.

The liquid water as outlined by the new discovery is not the most practical to use. The RSL sites are located in very isolated and rough terrain (the slopes are 40 degrees steep); the water that’s there is transient, and kind of shallow; and again, it’s very briny.

And yet, according to Meyer: “If you need water as a resource on Mars, [the RSL sites] hold promise. And if we pinpoint the source of the RSL sites, we may have access to a liquid aquifer that can meet our needs.”

Putting aside logistical issues with accessing the RSL sites for water, the discovery also created a shift in how we think about life on Mars. “Now, you suspect there is water accessible on Mars,” says Meyer. Water is there in some form. It now changes how you think about Mars in terms of resources for life available on the surface.

“Mars looks like a little bit of a better place to send humans than we thought before,” says Meyer.

This is critical for maintaining a sustainable human colony. For example, we’ll need to create farms to grow our own crops. SpaceX CEO Elon Musk unveiled on Tuesday his company’s plans to send humans to Mars, and made a bold claim: We can grow plants on Mars just by compressing the atmosphere.

So situating ourselves close to the RSL sites might be very useful and will allow us to collect amounts of water that are actually practical to use. Meyer explains that NASA’s review of potential landing sites for its own Mars mission plans is already taking into account predictions of where water might be found in greater concentrations.

Still, the discovery is not really the game-changer it was initially reported to be. “I was glad to be a co-author,” says McEwen, “but I found the media hype a tad embarrassing. This was an important incremental result, but not necessarily as groundbreaking as NASA officials and news media reported it.”

And as Meyer emphasizes, “the source of the water is still a mystery. But it’s a great problem. We’re headed in the right direction. We have a lot to learn about an alien planet, and that’s okay — it’s why we’re so eager to head over there.”