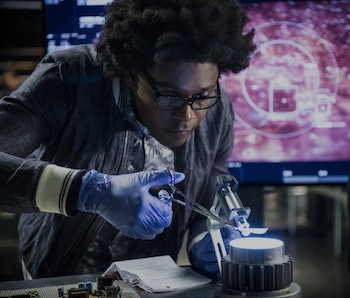 At last, Mister Terrific becomes whole. In last night’s blockbuster, breathless episode of Arrow on The CW — which revealed the identity of Prometheus — Curtis Holt (Echo Kellum) finally built his T-Spheres which helped save the day against Vigilante on the verge of assassinating Oliver Queen (Stephen Amell).

Like Spider-Man and his web-shooters, the T-Spheres define Mister Terrific — known as Michael Holt in the comics — as evidence of his genius. In the comics, Mister Terrific is the third-smartest person in the DC Universe who built spherical Swiss Army knives he dubs “T-Spheres.” They are A.I.-driven drones that can fly, project holographic images, release electrical charges, and hack into computers and satellites. In Arrow, Curtis uses his T-Sphere to track down Vigilante and knock him down with non-lethal flashbangs. They’re capable of practically anything, so expect Arrow to go nuts with the T-Spheres in the near future.

And fans were excited. The T-Spheres were first teased in Season 4 of Arrow as a hobby experiment of Curtis’s. But as Curtis became Mister Terrific in Season 5, he never used his T-Spheres, to the dismay of fans. But after Curtis built and used them this week in “Fighting Fire with Fire,” fans came lit.

“Finally” was a common word in many fans’ tweets.

Some thought he’s finally useful now that he has a weapon that can pretty much do anything.

And yes, there were GIFs to celebrate.

Truth be told, Mister Terrific is a heck of a lot cooler than he was just a week ago. Without the T-Spheres, Curtis was dead weight for the team. Everyone has a role: Green Arrow is the leader, Spartan (David Ramsey) is the heavy-hitter, Wild Dog (Rick Gonzalez) is the gun guy, Black Canary (Juliana Harkavay) has a special power, and ex-members Ragman (Joe Dinicol) scared the crap out of enemies while Artemis (Madison McLaughlin) was a great second shooter and could have excelled in espionage. But Mister Terrific? The guy brought almost nothing to the table, but now with his T-Spheres, he’s immediately invaluable. Star City is going to need him.