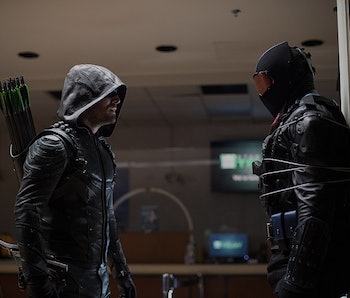 According to Arrow fans, Prometheus, the show’s new hooded archer, is either Tommy Merlyn or someone from Oliver Queen’s past. On this week’s episode, another masked character, the Vigilante — who first appeared in Action Comics in 1941 — made himself known in Star City by exacting a deadly brand of justice. His identity is even easier to guess than Prometheus’s.

Although the Green Arrow didn’t unmask Vigilante, thanks to an explosive fail-safe in his mask, the comics and some significant clues during the episode all but indicate the unnamed archer is Adrian Chase (Josh Segarra), the new assistant district attorney of Star City.

Replacing the late Laurel Lance as DA, Chase first appeared this season in “A Matter of Trust,” but he’s kept a low-key profile as an upstanding, straight-laced, and most of all, unassuming government employee. But in “Vigilante,” during an interrogation, Chase showed an unhinged darker side, complete with a ton of visual metaphors with the bank robber’s mask. “I’ve been to hell,” he tells her, “and that makes me somebody you do not want to screw with.”

What a rather … dramatic thing to say during an interrogation.

Chase gets the intel they need — the location of the gang leader’s motel — before sharing a revealing exchange with Mayor Queen. Chase tells Queen he’ll get a warrant, but Queen tells him, “As quick as you can. I don’t think this Vigilante waits on warrants.” The camera lingers on Chase, who mutters to himself, “No, I bet he doesn’t.”

In the very next scene at the motel, who else but the Vigilante shows up at the exact time the Green Arrow is there.

In the comics, Adrian Chase was the second person to carry the mantle Vigilante after Greg Saunders, a Native American cowboy who fought crime in New York City and was a member of the Seven Soldiers of Victory in 1941. In 1983, Marv Wolfman and George Pérez created Adrian Chase as a New York City DA whose family was killed by mobsters and sought justice by taking up the Vigilante mantle. Unlike his appearance in Arrow, Chase was sure not to kill anybody until his situation grew more dire as he became more lethal.

Thematically, the Vigilante is a darker mirror of the Green Arrow and a living testament to his failures. In a rare moment of vulnerability, Queen opens up to his team that he’s worried his years in Star City have been a waste if individuals like Vigilante now exist. Vigilante is what happens when the Green Arrow goes too far, a path Queen already knows well.

Arrow didn’t reveal outright that Chase is the Vigilante, and it even cast a different actor (Mick Wingert) to voice Vigilante. But it’s still painfully clear Chase is the man behind the mask, even without the comics saying so. Expect Star City’s mayor and DA to fight again soon.