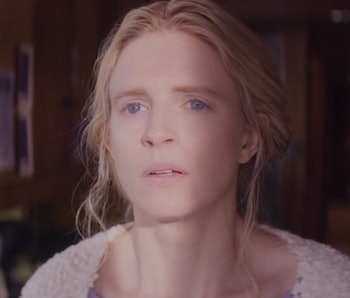 Season 1 of Brit Marling’s Netflix show The OA ended by casting its entire premise in doubt — but in a recent interview, Marling emphasized that the mysterious dimension-jumping Movements are the most important part to understanding ongoing story.

The first season focused on Marling’s character Prairie and her interactions with a group of misfit boys and their teacher. It had two storylines: one in the present as the recently-missing Prairie acclimated to her old life and bonded with the boys, and one in the past about her fantastical ordeal living as a captive and science experiment. According to Prairie, Near-Death Experiences can be used to unlock Movements — which look like interpretive dance moves that enable one to travel between dimensions. The season finale ended on an ambiguous note, calling her account of her captivity into question. However, the Movements seemed to work, as the boys and their teacher used them to stop a school shooter.

“I believe in what science fiction can do, which is it can set up simple rules that it has to follow to try to illuminate something about the present that is somewhat invisible to us. Except that, even in that illumination, you have to admit that you just don’t know — that some things are a capital M mystery that are beyond our five senses, and that we couldn’t possibly perceive or articulate … The OA is our attempt at writing and making a new human language through movement, this mythology we’re inventing.”

This idea is in line with her previous comments about Season 2 diving back into the show’s sci-fi elements. Because the brief Season 2 teaser features the Golden Gate Bridge, it’s clear that Homer’s Near Death Experience will be explained.

This latest comment, however, emphasizes that if the Movements are the key to the story’s mythology, interdimensional travel is very real and will be a major part of the show as it proceeds. One of the three main interpretations of Season 1 — that her story was fake all along — can now be eliminated.

Season 2 of The OA will be released at an as-of-yet unspecified date on Netflix.

More like this
Entertainment
20 hours ago
Neil Gaiman teases a Sandman prequel on Netflix. Here's what that means.
By Mónica Marie Zorrilla
Culture
8.2.2022 9:00 AM
7 incredible sci-fi shows and movies coming to Netflix in August 2022
By Robin Bea
Entertainment
8.9.2022 1:00 PM
Has your favorite HBO Max show been canceled? The fate of 9 sci-fi series revealed
By Robin Bea
Related Tags
Share: