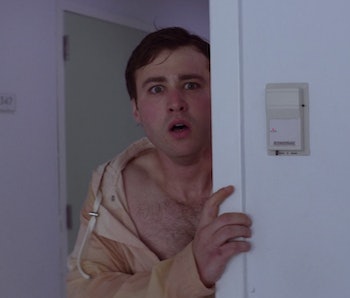 Season 1 of Netflix’s mind-bending series The OA left a lot of questions up in the air, but for some fans, one floated to the top: What, exactly, happened to Emory Cohen’s character, Homer Roberts, in the creepy hospital with the fish tank? The fourth episode, “Away,” features Homer’s Near Death Experience, a chaotic scene where he’s chased through a hospital by unknown forces and reaches a room with a fish tank. But before Homer’s NDE scene, while standing in his jailor Hap’s (Jason Isaacs) office, Homer hears a recorded voice say, “your name is not Homer” and “Do you know Doctor Roberts?” adding another layer to the mystery. Fortunately, a short teaser from Season 2 might give us some context for Homer’s traumatic NDE.

The Season 2 teaser doesn’t feature any main characters, but the Golden Gate Bridge prominently appears in it — just as it appears outside the window as Homer looks at the fish tank in his NDE. One enterprising Redditor was able to check out the location in real life and verify that this particular view of the bridge comes from the vantage point of the Robin Williams Tunnel.

As creator and star Brit Marling explained, The OA is meticulous in laying out its clues, so the fact that this view comes from such a specific vantage point probably isn’t a coincidence. The show could have easily shot in a random spot on the bridge — and yet, it chose a tunnel.

A tunnel signifies the depths of the Earth, or underworld, which is in line with the show’s many references to Russian mythology.

As another fan pointed out, the way the letters “O” and “A” appear in the official logo also resembles a tunnel and a bridge.

While it’s impossible to discern exactly where the show plans to go with this, one thing is clear: The door is closed on one interpretation of the Season 1 ending — that Prairie made her story up. Homer and his NDE are very real and relevant to Season 2.

Season 2 will air on an as of yet unspecified date on Netflix.