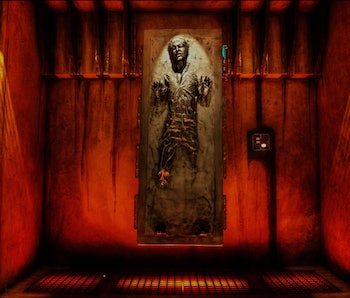 In a huge breakthrough for transplant medicine, scientists have developed a successful technique for rewarming cryogenically frozen tissue.

Cutting-edge nanotechnology is now able to rapidly reheat biological samples that have been vitrified — which is super-cooling them to a glassy state — without damaging them. This brings humanity a step closer to making organ cryopreservation a reality. The process could save millions of lives and eliminate the entire transplant waiting list.

A team of researchers at the University of Minnesota successfully thawed 50-milliliter samples, far beyond the previous record of one millimeter. A study detailing the research was published Wednesday in the journal Science Translational Medicine. Now, it’s a straight shot to cryopreserving full human organs.

Vitrification is the prevailing method for long-term tissue preservation, and it works by super-cooling the samples to a liquid so high in viscosity it’s basically a glassy, non-crystalline (meaning, non-ice) solid. Up to now, scientists have been able to send tissue samples and even full organs like kidneys into a deep freeze since the mid-’80s - the problem is bringing them back.

Retrieving cryogenically treated samples isn’t just a matter of letting them gradually thaw. Attempts to rewarm vitrified tissue over the years have invariably resulted in matrix disruption, or the material cracking and crystallizing. A method called convection-warming has been the gold standard for the last decade or two, but it was never quick enough to allow scientists to scale up — meaning there could never be any practical application for whole organs, or even functional tissue samples like grafts of skin. No samples large than one milliliter (volume of tissue and solution) had ever been brought back intact.

To avoid cellular damage in an organ like a kidney, scientists need to bring it back up to a standard temperature faster than it was brought down — way faster, at least one or two orders of magnitude. This translates to hundreds of degrees Celsius per minute, and the heat must be uniform. To achieve this, the team deployed silica-coated iron oxide nanoparticles into a solution in and around the samples to act as protective, evenly distributed heat sources. After more than five years of work, they were rewarded by seeing a vitrified system successfully heated in an entirely novel way.

“That was the ‘Eureka!’ moment,” John Bischof, a mechanical and biomedical engineering professor at the University of Minnesota, told reporters this week. “I knew we were onto something that could potentially be transformative.”

In addition to human skin cells, researchers have successfully thawed samples from various animals like pigs, whose human-like hearts make them notable in medical science). Most impressively, a full pig kidney has been thawed after being cryogenically frozen. Once thawing is complete, the nanoparticles simply wash away. Scientists working at the level of rabbit organs now and will progressively scale up to larger organs before eventually trying freeze and then thaw out human organ.

“There’s nothing that precludes us from doing that,” Bischof says. “The technology does exist.”

Is This Even Legal?

The timeline for scaling up to human organs and getting the technique on the market is still subject to regulatory variables: The FDA, for example, will need to get involved once the tissue samples pass a certain threshold of complexity.

The Department of Defense has already funded a Phase II small business investigative research and development grant, and the team expects to begin the first trial with human samples — preliminary work with skin and muscle tissue from donors — in less than a year and a half.

If the experiments on human organs prove to be successful, scientists will move on to samples from human faces and hands — anything that has a major blood vessel to allow the nanoparticles to profuse. Though they’ll be focusing on kidneys in the coming weeks, the team predicts that the first human organ ever unfrozen by way of nanoparticles will be a heart.

The large luminal structures of the heart — the empty chambers you think of on a diagram — are the most conducive for distributing the nanoprobes and allowing them to thoroughly profuse the tissue. Other organs should follow within the next seven to ten years.

The end game is widespread use by transplant surgeons, and the team is already in contact with a number of them. The nanoprobes also have practical applications for cancer research — destroying targeted cells via extreme temperatures — as well as for cardiovascular and neural diseases. In addition to rendering the transplant list obsolete, it’s always fun to think about the ways we could use this technology to help colonize space.

Overcoming a major hurdle in transplant medicine, a new study reveals that nanotechnology can be used to rapidly rewarm cryogenically treated samples without damaging delicate frozen tissues, which may someday help make organ cryopreservation a reality. More than 60% of the hearts and lungs donated for transplantation must be discarded annually, because these tissues cannot be kept on ice for longer than four hours. According to recent estimates, if only half of unused organs were successfully transplanted, transplant waiting lists could be eliminated within two years. Long-term preservation methods like vitrification – which involves super-cooling biological samples to a glassy state – could establish tissue storage banks and reduce transplant rejection rates, greatly facilitating the process to find matching donors when needed. Unfortunately, while sophisticated cryopreservation methods exist to keep samples cold, tissues often suffer damage and even crack during the thawing process. Navid Manuchehrabadi and colleagues developed a unique approach to quickly warm up frozen tissues without compromising their cellular viability. The researchers mixed silica-coated iron oxide nanoparticles into a solution and generated uniform heat throughout the samples by applying an external magnetic field. After rewarming, none of the tissues displayed signs of harm, unlike control samples rewarmed slowly over ice. What’s more, the nanoparticles were successfully washed away from the sample following thawing. The scientists also tested their set-up using frozen human skin cells, segments of pig heart tissue, and sections of pig arteries in larger-sized volumes amounting to 50 milliliters. Although scaling up the system to accommodate whole organs will require further optimization, the authors say the technology might be applied beyond cryogenics, including delivering lethal pulses of heat to cancer cells.

More like this
Mind and Body
Sep. 25, 2022
Why just one case of polio is cause for alarm — a virologist explains the dreaded disease
By Rosemary Rochford and The Conversation
Mind and Body
Sep. 24, 2022
Your gut microbes are thousands of generations old — new study
By Taichi A. Suzuki, Ruth Ley and The Conversation
Innovation
Sep. 29, 2022
Scientists have created a mechanical womb that can grow life in the lab
By Miriam Fauzia
Related Tags
Share: