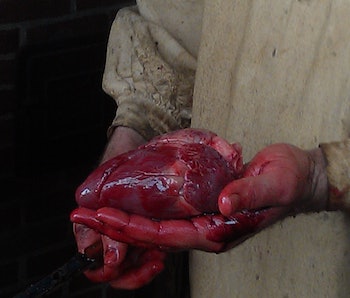 The future of organ transplants may have just arrived: Researchers at the National Institutes of Health in Bethesda, Maryland report in the journal Nature Communications that they’ve successfully kept transplanted pig hearts alive in baboons for nearly three years. The breakthrough in xenotransplantation is being treated as a medical miracle. And for good reason: 22 Americans die waiting for heart transplants daily. But the more remarkable event taking place is a rapid public shift in attitude. There was a time, not too long ago, when the thought of transplanting hog organs into humans would have provoked public outrage.

For a long time, animal-to-human heart transplantation belonged strictly to the realm of science fiction. When it first made the jump to reality in 1964, the public was horrified — and understandably so. Dr. James Hardy, a surgeon at the University of Mississippi Medical Center who had completed the first human-to-human heart transplant the year before, published a “Heart Transplantation in Man,” in which he described transplanting a chimpanzee heart into dying patient. Unfortunately, Hardy’s little experiment with the chimp heart didn’t go well: the animal organ was too small to support blood circulation, and the patient died within 90 minutes.

Hardy had crossed a line. The medical community and the general public had supported his attempt at transplanting a lung from other humans, but transplanting a heart — let alone one from a chimpanzee — was a different story altogether. Writing in his book The World of Surgery, Hardy admits to having braced himself for public backlash, saying he was “well aware that any transplantation of a heart in man would be followed by public consternation” and “the use of a chimpanzee heart would augment the criticism immeasurably.” He was right. But that’s not the kicker. Turns out Hardy hadn’t even meant to resort to xenotransplantation. He just didn’t have a heart handy and he did have an emergency chimpanzee (as one does).

It’s hard to say whether the public’s reaction would have gone differently had the operation been successful, partially because of the nature of the organ itself. In addition to being the body’s fuel pump, the heart also carries immense symbolic weight. As Hardy’s daughter later remembered in an interview, “Many believed that if you transplanted the heart, you transplanted the soul. Even at school, we were aware that people were upset. As a child, it was difficult to understand why.”

Today, genetic engineering has blurred moral lines. The media’s take on pig-to-human heart transplants is outright optimistic: Now, we’re talking about being “one step closer” to transplantation, with pig hearts “paving the way.” The focus now is on “smashing records,” and “saving people,” not the imminent demise of humanity.

What changed? The pig hearts used in the Nature Communications study were genetically engineered to prevent rejection and blood clotting, and powerful anti-rejection drugs and antibodies help the hearts settle into their hosts without being attacked by the immune system. But more importantly, we’re no longer debating the philosophy of xenotransplantation — at least, not in the circles that could stifle the technology’s progress.

Maybe we believe the soul lives elsewhere; or maybe we’ve stopped believing in souls at all, choosing to root our humanity in the human body itself. In 2016, there are few ideas we won’t entertain if it means keeping the physical form intact: in the past year alone, we’ve considered uterus transplants, head transplants, and even penis transplants, and we’ve championed the use of exoskeletons and prosthetic limbs to enhance our bodies. The thought of sourcing physical enhancement from other species no longer seems like much of a leap. Of course, the question at the end of the day is always: “What makes us human?” The definitive answer is that the answer is always open to change.