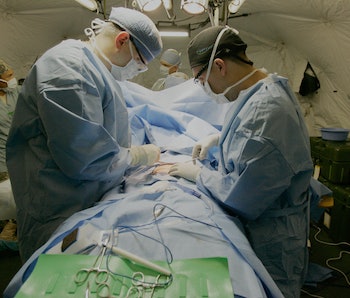 Meet Valery Spiridonov. In 2017, he’s set to become the first person ever to receive a head transplant. Though, it is perhaps more accurate to call it a body transplant: Spiridonov will keep his head and gain someone else’s body — if all goes according to plan.

Why would he volunteer for such a thing, you ask? Spiridonov suffers Werdnig-Hoffmann Disease, a rare genetic condition that causes muscle wasting.

“I can hardly control my body now,” he tells MailOnline. “I need help every day, every minute. I am now 30 years old, although people rarely live to more than 20 with this disease.”

But it’s not just about relieving his suffering. In this video, he compares the surgery to sending the first man into space:

“In the future it will help thousands of people who are in an even more deplorable state than I am,” he says, according to the translation from Russian.

Spiridonov is a computer programmer, so it makes sense that he’s curious about how the information systems in his brain link up to his body.

“Am I afraid? Yes, of course I am. But it is not just very scary, but also very interesting,” he tells MailOnline.

Spiridonov connected with Italian surgeon Sergio Canavero. The doctor is a controversial figure for even daring to suggest that a head transplant is possible. Canavero outlined his planned approach to reattaching the spinal cord in a paper published by Surgical Neurology International.

The procedure will involve finding a body donor — someone who is brain dead but healthy in body and on life support. Both heads would have to be severed cleanly at the same time, and surgeons would have only about an hour to connect Spiridonov’s head to the circulatory system on the new body, to allow oxygen to flow back to his brain. The entire procedure is expected to take 36 hours and cost $12.6 million.