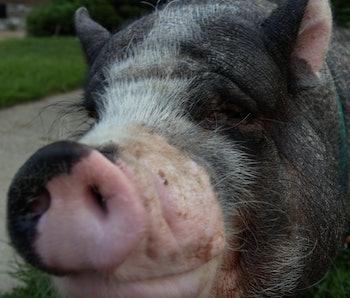 Human organ banks are in the middle of a crisis. Demand for organs is relentless — an American is added to the organ national transplant waiting list every 10 minutes — and outstrips supply. And the effects are not abstract: 22 people die waiting for organ transplants every day. Now, as pig organs prove to be viable in simian species, help might be on the way from big pork. But can pig farming really be the future of healthcare?

Scientists have long known that pig organs and human bodies are mostly compatible. Anatomically speaking, we’re highly similar species, which is why you dissected pig livers in high school. We’re also similarly sized if different proportioned about the extremities. It is for these reasons that transplantation scientists have been hungrily eyeing hogs for several decades. With the right genetic technology, the thinking went, we could make pig organs viable in humans. Transplant lists would represent orders rather than prayers.

The problem at the heart (or kidneys) of xenotransplantation, the process of intra-species organ trading, is the immune system. Baboons given pig organs historically struggled to remain well when their bodies turned on the new organs.

In 2014, researchers at the company Revivicor, Inc. managed to engineer pigs devoid of the genes that trigger human immune response. Those links in the amino acid chain were actually replaced with human genes to boost compatibility. The pigs were — and are — medical marvels and the test hosts didn’t reject their organs. That’s good news for both those in need of organs and pig farmers willing to moonlight as amateur geneticists.

Still, it’s in the early days. The test hosts — baboons — were on immunosuppressants and the pig hearts weren’t used as replacements: They were nestled in the baboons’ abdomens to test the immune response. The longest-surviving hearts lasted 200 days and carried the human gene for thrombomodulin, a protein that helps keep dangerous blood clots at bay.

Immune systems aside, there’s also the problem of pig transplants carrying pig-specific viruses and bacteria. Zoonotic diseases — and swine flu in particular — represent a major threat to not just individual humans, but human populations. And organ transplantation is a free cruise for pathogens, which flourish in immunosuppressed and presumably weakened systems.

Fortunately, there’s hope on that front as well thanks to the gene editing tool CRISPR/Cas9. A team of Harvard scientists recently figured out how to use it to knock out all of the PERVs — that’s scientist humor for “porcine endogenous retroviruses” — in pig cells, resulting in a virus transmission rate 1000 times lower than normal.

If genetically engineering pigs to be immune system-friendly and virus-free succeeds — and there’s plenty of evidence to suggest it will — pig farmers will be left alone to breed their hogs pretty much as they always have. The genetics are what matter, not the conditions, which means that these organ donor pigs could eat from the same troughs as their porcine ancestors without necessarily endangering the human lives they were created to save (though organ health will obviously be the chief dietary concern). The system will never be kosher with animal rights advocates, but it does have potential to comfort the 123,000 Americans currently on organ donation lists. Pig farmers will be heroes.