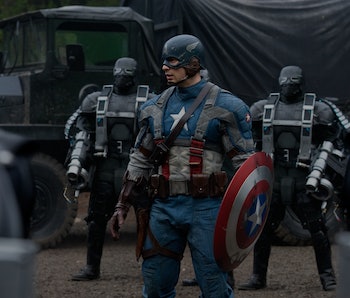 Captain America has been a symbol of American idealism since he first appeared on a comic book page in 1941. What a lot of casual Cap fans don’t realize, though, is that Steve Rogers has not always been Captain America. In reality, Steve dies, making way for a lifelong friend and ally to take his place. If the Marvel Cinematic Universe wants to stay true to the original story and give its massive, interweaving plot forward momentum, there’s a very good likelihood Steve will die onscreen in the near future — and it’s got everything to do with Marvel’s legendarily complicated contracts.

This article might contain spoilers for the Marvel Cinematic Universe.

In Marvel’s comics, Steve Rogers “dies” in the fittingly titled story arc from 2007: “The Death of Captain America.” Following the events of the first Civil War series, Steve is taken into custody for defying the government’s superhero registration efforts. He’s assassinated on the steps of a federal courthouse through the dual efforts of Crossbones and a brainwashed Sharon Carter, who delivers the final blow with a close-range gunshot to the head.

Wracked with guilt, S.H.I.E.L.D. Director Tony Stark (Iron Man) teams up with Natasha Romanoff (Black Widow) to hunt down Steve’s killers to avenge him. In the middle of all the chaos, Tony receives a letter — a will of sorts — written by Steve that entails who he wants to pick up the Captain America mantle upon his death: Bucky Barnes, the Winter Soldier. Bucky, Steve’s oldest friend, agrees to do so (after a lot of angsting) but only after demanding his independence; he doesn’t want to be privy to the will of Stark, S.H.I.E.L.D., or the Initiative.

Evans, who’s played Steve Rogers since 2011’s Captain America: The First Avenger, has appeared as Cap in five MCU films (not including a cameo in Thor: The Dark World when Loki impersonated Steve to get under Thor’s skin), and he’s scheduled for two more: Avengers: Infinity War and its as-yet-unnamed follow-up, Avengers 4. It’s widely known that Evans has expressed a desire to break away from the superhero business to pursue smaller roles and directing gigs. But the closer the world gets to 2019 — when Avengers 4 is expected — the more hesitant he seems about leaving.

“When you make good movies, who wants to stop doing that?” Evans told Collider in April 2016. “I don’t know [about re-upping the contract]. I mean, I know in the comic books the shield gets passed off and what you do know, more than anything else in this process … [is that] the character’s bigger than you. And whatever the character needs, whatever Marvel needs for that arc, I’m willing to do. So, if that is me passing it off, I’ll pass it off. But if they want to make more, I’m ready.”

As Evans pointed out, it’s all about what Marvel and Disney want. As of right now, Evans has two more Marvel movies to go. Meanwhile, Sebastian Stan, the actor who’s portrayed Bucky Barnes and the Winter Soldier in three MCU films (The First Avenger, Captain America: The Winter Soldier, and Civil War), is signed onto a massive nine-film contract with Marvel. And his stint in The First Avenger didn’t count — the contract was signed after Bucky fell off a speeding train.

So, for those of you keeping track at home: Stan’s got seven more movies to go. That probably means he’ll fulfill two more of them with the upcoming Infinity Wars and Avengers 4. The Russo brothers — the minds behind Winter Soldier, Civil War, and the upcoming Infinity War — say that Bucky and Cap’s relationship will be a major plot point going forward, but that doesn’t necessarily mean Bucky will be directly involved. Stan is reportedly confirmed for an appearance in Infinity War, though no one knows what shape that will take.

The last time anyone saw Bucky in the MCU was when Steve and T’Challa (Black Panther) put him on ice in Wakanda until Bucky’s brain could be deprogrammed of all the Hydra crap going on in there. Some have speculated this could mean a Winter Soldier cameo in 2018’s Black Panther, but there’s still no official word.

The story that Marvel, and especially the Russo brothers, have woven with Steve and Bucky up to this point — the few times Bucky has held the shield with a meaningful close-up coupled with Steve’s willingness to give up his title at the end of Civil War — fully indicates that Bucky will pick up the shield upon Steve’s death. Stan will still have at least five more movies to fulfill after Infinity War and its sequel, providing a significant amount of time to build a real narrative for Bucky’s Captain America.

But then that raises questions of when and how the MCU will come to an end — and that’s a road we don’t need to go down at the moment considering we’ll have nine more MCU films arriving within the next two years. Kevin Feige is a busy man, and five movies with Bucky Barnes as Captain America is a lot to chew on. By that point, there’s a chance Sam Wilson (portrayed by Anthony Mackie in the MCU) could take up the Cap mantle, as he has in the comics, adding yet another layer of confusion for general audiences. Again: That’s a road for a different time.

Steve Rogers will most likely die at the end of Infinity War’s sequel, the untitled Avengers 4. Unless Evans makes the unlikely decision of re-upping his contract (which Tony Stark actor Robert Downey Jr. has done before), that will have given Bucky enough time to do some recovery and, maybe, gain some trust from the other Avengers. Steve’s death doesn’t necessarily mean he won’t pull a rebirth, but it seems unrealistic. So, maybe it’s a good idea to start stocking up on tissues right now.