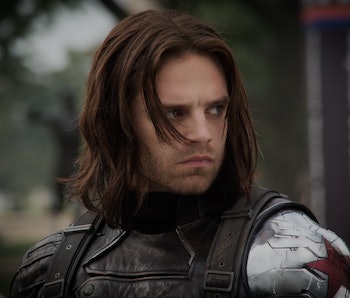 Bucky Barnes’s Winter Soldier got the beatdown this year, but he still came out on top, at least as far as the collective internet orgasm and blogging thirst-circus, Tumblr, has to say. Sebastian Stan, the actor behind Marvel’s Bucky Barnes and Winter Soldier, was announced today as the most popular actor on Tumblr in 2016, officially dethroning Captain America actor Chris Evans. This doesn’t come as a surprise at all.

Tumblr just released its 2016 “Fandometrics” report — the “pleasingly scientific ranking of fandoms on Tumblr,” the company’s year-end review that catalogues everything fandom related from movies to music to, yes, ships and memes alike. Puppies are the most popular animals on Tumblr (with kittens coming in for a close second), Beyonce’s Lemonade was 2016’s most-blogged album, and Sebastian Stan overthrew Chris Evans as the most-discussed actor.

Stan, a Romanian-born U.S. immigrant with Sinatra-blue eyes and a smolder that could stop a speeding truck, most likely owes his newfound online popularity to his role as Marvel’s Bucky Barnes. Bucky is, of course, the Winter Soldier, Captain America’s (Steve Rogers, portrayed by the recently dethroned Evans) bestie and not-always-so-platonic soulmate. He’s the main catalyst behind Steve’s call to action in both Marvel’s Winter Soldier and Civil War, and the character’s introduction in the former resulted in an online shit storm of epic proportions. Bucky is, to put it in totally cringe-worthy terms, Tumblr’s boyfriend.

But what makes Bucky the perfect candidate for Tumblr’s love? It’s not his killer hair, “thighs of betrayal,” or the cybernetic arm (not that any of those things hurt), but what fans perceive as his personification of a wounded puppy. A violently confused wounded puppy, but a wounded puppy nonetheless.

Stan himself plays a part in this; he’s always quick to defend his character in interviews, reminding people that Bucky isn’t so much a villain as he is a victim. Bucky’s status as a tool used against his will by the evil HYDRA throughout its history makes him the ultimate sad story. And Tumblr loves sad stories.

In the MCU, Bucky starts out as the handsome, side-smirking counterpart to Steve Rogers’s bumbling sincerity in The First Avenger, the best friend who’s with Steve “‘til the end of the line.” Literally. He dies by falling off a train, and Steve mourns the loss of his best friend before promptly crashing a HYDRA ship into the Arctic.

But the next Cap adventure, The Winter Soldier, reveals that the impressive, dark-clothed assassin with great hair behind the mask is none other than (surprise!) Bucky Barnes, Steve’s supposedly dead best friend. And Tumblr collectively lost its fucking mind.

Here’s this aesthetically pleasing character with a tragic backstory, no memory, a deep history ripe for speculation, and an element of danger. Hello, brand new problematic fave. And the fact that he continues his wounded-loner, deadpan-snarker brand in Civil War while competently kicking ass and still managing to look pathetic and tortured? Tumblr catnip. It’s honestly not even fair to Steve’s ranking as Tumblr’s favorite. Bucky wins hands down.

But his reign might not last into the new year. With Bucky holed up in Wakanda at the end of Civil War and put back into cryostasis under the watchful eye of Black Panther, it doesn’t seem like he’ll be making too many appearances in the near future.

Not all is lost, though. Bucky (Sebastian Stan) is signed on to a nine-film contract with Marvel, and has only appeared in three up to this point (First Avenger, Winter Soldier, and this summer’s Civil War). It’s been hinted that Bucky will pick up the Captain America shield at the end of Steve Rogers’s reign, which would align perfectly with Stan’s remaining six films. So, while Bucky might fall from Tumblr grace for the next year or so, his return to the Marvel screen will probably keep him on the throne for years to come.