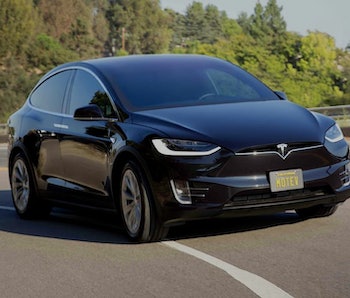 This Sunday, Morgan Freeman and a bunch of Hollywood A-listers will roll up to the 89th Academy Awards in a fleet of jet-black Tesla Model S and X vehicles, because as much as the company wants to prove it can make an affordable electric car, it can’t help its reputation for being luxurious AF. Freeman is the sole investor in Motev, an all-Tesla limousine service startup that currently boasts a fleet of four Model S and seven Model X Teslas, complete with sleek black paint jobs, leather interiors, and yeah, the P90D Ludicrous speed upgrade.

Tesla may be gearing up to introduce the Model 3 as an affordable, $35,000 entry into the electric car market, but Motev shows the company still commands respect in the luxury arena. It’s where Tesla first got its footing, when the two-seat Roadster rolled out with a $109,000 asking price in 2008. The company is expected to launch a next-generation Roadster in 2019.

And celebrities love Tesla. Ben Affleck, Cameron Diaz, and Will Smith are just some of the A-list actors that own one of the electric vehicles. Actress Alyssa Milano, actor Tyler Case, and producer Cole Plante have all paid fan service to Elon Musk through Twitter. Morgan Freeman, who owns a Signature Model S, has said he’s a “huge fan” of Musk and that “he’s got the most incredibly forward thinking ideas about where we can go technologically.”

“Most people want a Tesla,” Gaskill said. “They love the idea—it’s all electric, zero emissions, and it’s terrific for the environment.”

But Motev has added a number of luxury extras to its Teslas. For the $80 per hour asking price, cars come with bottled water, cooled towels and aromatherapy oils. The chauffeurs wear tailored suits and receive Red Cross training. There’s even a selection of tools, like breath fresheners and safety pins, aimed at strutting out onto the red carpet flawlessly.

Motev has big plans to expand. It currently only operates in Los Angeles, but wants to expand to New York and Atlanta.

Watch the fleet in action here: