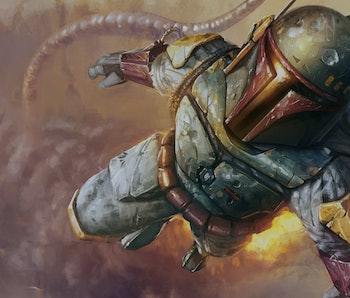 If you think there’s good money on Boba Fett’s son showing up in Star Wars Episode VIII: The Last Jedi, think again. The rumor of Benicio del Toro playing a relative of the beloved bounty hunter makes little sense and the source of the rumor is basically a trick for the weak-minded.

First of all, Wikiwand isn’t a news source: It’s proprietary software which allows people to browse Wikipedia differently. So, if someone saw something on Wikiwand, they’re seeing what is essentially a filter on an open-sourced collaborative database. The likelihood that someone from Lucasfilm leaked the name of a character in this way is really low. Had “Sir Vicrum Fett” appeared on IMDb and then was taken down, or had it surfaced in some advanced advertisements for toys, then there might be good reasons to take the rumor more seriously. Of course, it’s possible Benicio could be playing a character with this name, but he source seems pretty much non-existent.

On the nitty-gritty canon front, assuming this rumor could work, how the hell does Boba Fett have a son? And why would this hypothetical son be like fifty years old? In Attack of the Clones, Boba Fett is nearly half Anakin’s age; he’s somewhere between ten and 13. (Daniel Logan was 13-years-old when he played the part.) Attack of the Clones takes place about 53 years before The Force Awakens. So, if Benicio is playing Fett’s son, and he’s supposed to be playing his real age, then Boba Fett would need to reproduce when he was still a tween.

Unless — and this is the only way to make this work — “Vicrum Fett” is a clone of Boba Fett, the same way Boba Fett was a clone of his father, Jango. At that point, all bets are off, and seemingly the rumor could work. There was also a character named “Vorten Fett,” in Star Wars: The Old Republic video game, but that’s not a family relation. In that continuity, the name “Fett” was given to people in a specific clan.

So, if a rumor from a source that isn’t a source can be trusted, and you do a little interpolating, there’s an outside chance that Benicio del Toro could be playing a person who is maybe a clone or maybe in the same clan as Boba Fett … but probably not.