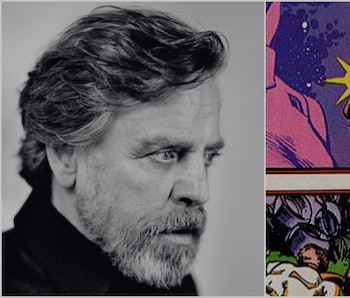 Luke Skywalker’s lonely exile probably makes him the last Jedi in the upcoming Star Wars episode The Last Jedi, but actor Mark Hamill tweeted a reminder that the now-unofficial Legends canon had a ton of so-called “last Jedi” running around too. Also, director Rian Johnson is relatively young.

Hamill’s often jovial Twitter presence remained that way when he tweeted a cover of the 1981 Star Wars Marvel comic also titled “The Last Jedi!” (don’t forget the exclamation point). He reminded his 1.6 million followers that The Last Jedi writer/director Rian Johnson was only seven years old when the comic was released a year after The Empire Strikes Back and two years before Return of the Jedi.

The tweet is a fascinating reminder that the title of the newest Star Wars episode isn’t anything new. The 1981 comic was a spinoff adventure story about Luke and Leia encountering a senile alien named Jedidiah who keeps referring to himself as “Jedi,” hence the title.

The Last Jedi was also the name of a 10-book YA series that takes place after Revenge of the Sith in which a Force-sensitive fighter named Ferus Olin tries to harness his powers. But the title there is a bit of a misnomer. Technically Yoda and Ob-Wan Kenobi are still alive in the Star Wars timeline at that point, so Olin is far from the last Jedi. At least the 2013 Star Wars novel, also called The Last Jedi, followed a Jedi Knight named Jax Pavan struggling after he is tempted by the dark side of the force following the events of Revenge of the Sith.

All these are obviously no longer canon, and the only Last Jedi that matters is the now grown-up Johnson’s new movie. Who knows, maybe the person who eventually does the sixteenth Star Wars movie is seven years old right now and will be inspired by The Last Jedi when it hits theaters on December 15.