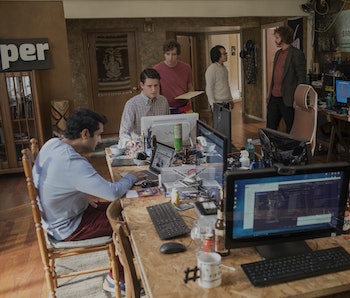 The Silicon Valley Season 4 trailer is out, and we’ve got a new look into the world of fidgety full-stack engineer Richard Hendricks, who’s set up the new season with this quote:

“We could build a new internet.”

What is Hendricks talking about exactly? In the previous three seasons of the HBO series, the Pied Piper team developed a lossless video compression algorithm that’s miles ahead of both the clawing competition and what’s available to in the real world. So perhaps the “new internet” is something just over the horizon as well.

One theory that’s particularly appealing is the possibility that this “new internet” applies Pied Piper’s compression algorithm to all data across the internet.

Reddit user jacksonV1lle theorizes, “why use their algorithm on a single app when they could use it to revolutionize how data is transferred globally?”

In the show, Hendricks’s middle-out compression makes file sizes smaller at higher quality. So if this compression was applied to all data across the web, then it’s possible that internet speeds would be way faster and computers would require less internal storage.

Abhishek Biswal, a programmer for the dating app Matchr, proposes a couple of theories. The first one is that Richard tries to make a second internet because the existing one is too crowded, but gets shot down.

“Notice how Richard is shown as a crazy dude,” says Biswal.

Biswal’s second idea is that the “new internet” has something to do with the internet of things.

“I can see a lot of hardware (even an electric car) in the background in the last scene,” Biswal tells Inverse via Twitter. So perhaps Richard’s new idea is less about making information more compressed in the digital world and more about expanding the internet’s reach in the physical world.

Another theory from redditor Chispy goes wider: Is the “new internet” a spatial internet or mixed-reality internet, seamlessly integrating digital skins over the entire world through augmented reality or virtual reality hardware?

“You could walk downtown and have entire buildings, roads, and parks mapped with digital skins, objects, and sounds. You could turn any old decrepit building into anything you want. The entire sky can turn into your desktop background.”

This grand vision doesn’t sound too far out of the realm of possibilities in Mike Judge’s version of Silicon Valley.

It’s also possible that the “new internet” isn’t even a good idea or a new one. In a show famous for lampooning Silicon Valley entrepreneurship, there’s always the possibility that Richard’s great new idea already exists or just plain sucks.

We could speculate forever, but for the answers, we’ll have to wait until Silicon Valley season 4 premieres at 10 p.m. EST on Sunday, April 23.

More like this
Entertainment
6.24.2022 2:00 PM
Westworld Season 4 fixes the worst thing about Season 3 — but is it too late?
By Mónica Marie Zorrilla
Entertainment
6.21.2022 11:15 AM
'Umbrella Academy' Season 3 avoids 'Game of Thrones' biggest mistake
By Jake Kleinman
Culture
13 hours ago
Who is Christina in 'Westworld' Season 4? Evan Rachel Wood explains her "new" character
By Mónica Marie Zorrilla
Related Tags
Share: