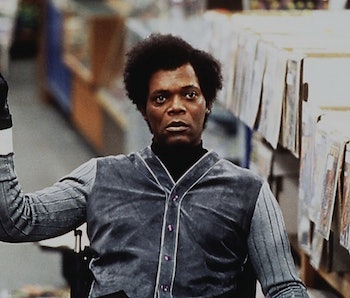 Samuel L. Jackson wants his character from M. Night Shyamalan’s Unbreakable — Mr. Glass — to bust out of prison for the seemingly inevitable sequel to Split. Hopefully, Mr. Glass won’t have to break all his bones in the process.

In a recent interview with Collider about Kong: Skull Island, Jackson revealed ongoing talks between himself and Shyamalan. The director prompted Jackson to see Split, and the actor described his response:

“So I went to the arranged screening and I called [Shyamalan] immediately and was like, ‘OK dude does this mean what I think it means?’ and he was like, ‘Well first we gotta see how the movie does’. And I think the movie’s done well enough now to merit the ‘OK, let’s put this together.’”

Sure enough, Split did indeed do incredibly well, bringing in $40.2 million in its opening weekend, which prompted Shyamalan to announce soon after that he was fast at work on a sequel.

The big, unexpected (yet totally sort of expected because it’s Shyamalan) twist at the end of Split was that the movie took place in the same universe as Unbreakable (2000), revealing Bruce Willis’s David Dunn sitting in a diner talking the current state of supervillains — like Kevin from Split’s Horde and Mr. Glass — with normies.

Jackson sees the Horde as a worthy superpowered foe for Willis’s unbreakable, aquaphobic hero, and notes that his own character’s frailties would fuel Mr. Glass’s frustrations with the existence of such people: “It’s just a matter of breaking my ass out of wherever that mental institution was they had me locked up and let’s get it on, let’s see what happens!”

Nothing is definite with Unbreakable 3/Split 2 just yet, but it seems all but inevitable that we’ll get another superpowered entry in the Shyamalaniverse. Samuel L. Jackson is certainly game, and we are too.