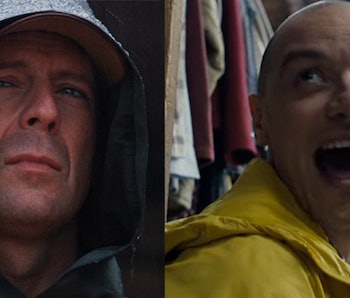 The only thing more surprising than the astounding success of M. Night Shyamalan’s latest movie, Split, was the thriller’s big twist. The reveal that Split was a stealth sequel to his 2000 movie Unbreakable and a cameo from Bruce Willis has fans clamoring for Split 2 — or maybe it’s really Unbreakable 3. Luckily, Shyamalan wants a sequel too, and in a tweet over the weekend, he revealed that he’s already started working on the new flick.

“I have an 11-page outline for my next film in the bag,” Shyamalan wrote on Saturday. “I can’t tell you what it is, but if you’ve seen Split…” he added, essentially confirming that the next movie is going to take place in the same universe as Unbreakable and Split.

In an interview with The Hollywood Reporter last month, Shyamalan said he wanted to bring Split’s the Horde, played by James McAvoy, and Willis’s Unbreakable characters together for another movie — it’d be more than just a cameo this time. “This is down the line, but my hope is to make one final movie that combines the two,” he said.

There’s no release date or additional details about when that next movie might come (or how extensive the crossover might be) but Shyamalan is making progress, it would seem.