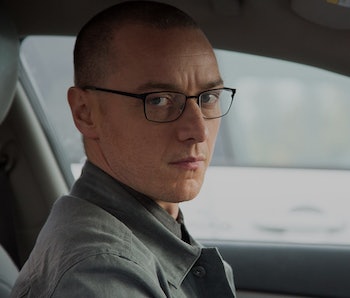 M. Night Shyamalan’s newest horror-thriller Split, starring James McAvoy, had a killer twist ending that was almost good enough to make up for The Happening. (Or After Earth. Or Lady in the Water. Or …) But the ending might have actually been hinted at on the poster: A painfully aware fan on Reddit has pointed out a connection between the poster for Split with one of Shyamalan’s previous movies, promptly blowing more people’s minds. Spoilers for Split are below.

As revealed in the final scene, Split is a sequel to Shyamalan’s superhero thriller Unbreakable starring Bruce Willis, with Split being an origin story for David Dunne’s next “supervillain.” The poster for Unbreakable has, predictably, a glass crack running through the middle, dividing Bruce Willis and Samuel L. Jackson, who played the villain Mr. Glass.

However, when placed side-by-side with the Split poster featuring a close-up of McAvoy’s mug, which also has a glass crack, the lines match up, echoing the shared continuity between the two films. It’s not a perfect 1:1 match, but where the lines meet is pretty uncanny.

Plans for Unbreakable 2 are underway, which will see Willis reprise his David Dunne against McAvoy’s Kevin/the Horde. “This is down the line, but my hope is to make one final movie that combines the two,” Shyamalan said in a recent interview.

Check out the two posters placed next to each other below:

Split is out now in theaters.