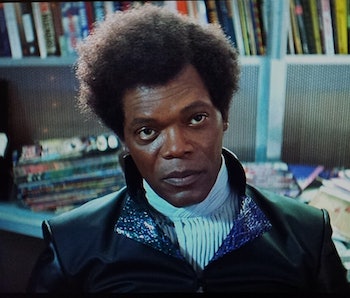 After the revelation at the end of Split, in which Bruce Willis reprised his role as David Dunn, it’s clear that writer and director M. Night Shyamalan wants to remind audiences about Mr. Glass.

Though Split was the first villain-centered film in Shyamalan’s new superhero universe, Kevin, aka the Horde, wasn’t the first bad guy on the scene. That honor belongs to Elijah Price (Samuel L. Jackson), aka Mr. Glass.

In the last few minutes of Split, Dunn tells a couple of women in a diner that the “crazy guy in a wheelchair” they remember being imprisoned “15 years ago” was actually Mr. Glass. In the final few moments of Shyamalan’s Unbreakable, a super-strong Dunn faces off against a hyper-intelligent, but physically frail, Price.

Dunn telepathically sees all the atrocities Price has committed in the hopes of chasing superheroes like him out of hiding, and Price counters by saying his role in life is to be the supervillain opposite heroes like Dunn.

Of course, a similar set-up is at play in Split: Kevin tells Casey that his mother abused him as a child (and her uncle raped her for years), and that trauma elevated him into a new, superhuman being in society.

The people Kevin calls “clean” are the ones Mr. Glass calls “exceptional,” and their shared fascination with superhumans links Split and Unbreakable together.

Shyamalan’s superhero universe is defined by its villains, which makes it unusual and surprisingly watchable, despite our world being heavily saturated with superhero stories. The director hasn’t committed to any future films in his yet-unnamed series, but it’s likely that any upcoming installations will focus on the villains in his world, rather than Dunn, who’s still the only hero we’re aware of. After the events of Split, the Horde is still on the loose and is all hopped up on his new powers, but Mr. Glass is still assumedly in an “institution for the criminally insane.”

Dunn was so visibly disgusted with Glass in Unbreakable that it would take a great deal for him to ask for his counsel, though Glass’s lifelong obsession with comic book tropes might actually help Dunn figure out what the hell is going on inside the Horde. A scene set in the institution would allow Samuel L. Jackson to reprise his role, as Bruce Willis did, and it would tie in a third movie pretty tightly.

Then again, taking such a huge step forward in world-building only to route back and comment on Unbreakable’s clean storyline might not be the best idea for Shyamalan. If there’s one thing he’s known for, it’s making a big, flashy exit from a story and not sticking around to tie up his loose ends. Ultimately, Glass doesn’t need to appear in order to tell a story about the Horde, David Dunn, and any other superpowered people running around Shyamalan’s new world, but the promise of everyone’s favorite Capitol One celebrity spokesperson donning his old leather jacket and cane might put butts in theater seats.

Split is in theaters now, and there is no confirmation of a third film in Shyamalan’s superhero collection.