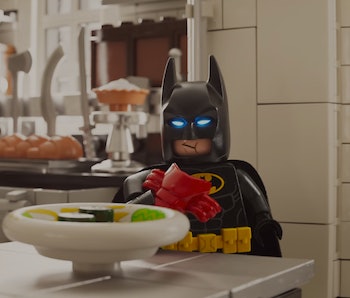 In the aftermath of The Lego Batman Movie, major studios and hardcore fans are arriving at a stunning revelation: It’s OK to invite viewers to laugh at Batman. After years of personifying vengeance and anger in and out of the DC Universe, Batman has lightened up. In an already bleak 2017, it’s a relief at least one of pop culture’s most recognized figure will crack a few jokes.

The Lego Batman Movie is itself a great movie about an arrogant, self-absorbed superhero learning to accept new people into his life. But the film is also a celebration of everything Batman, from his weird pulpy comic books to the idiosyncrasies of his blockbuster movies. It’s also VERY funny watching as Batman beatboxes his way out of trouble and or enjoys a viewing of Jerry McGuire in his bathrobe. It’s a far cry from the ultra-grim Batman in Zack Snyder’s Batman v Superman: Dawn of Justice, but it proves there’s a fluidity to Batman’s personality.

Since his debut in 1939’s Detective Comics, Batman’s image has swung like a pendulum, back and forth between cheesy and vengeful. Beginning as a gothic vigilante in Depression Era comics, Batman got groovy in the cult classic 1966 television series. Sporting bright blue spandex and Bat-Shark Repellants, the Adam West incarnation of Batman was everlasting as it ingrained the Dark Knight as anything but. Batman was a camp buffoon whose dancing fists made word-bubbles pop out of nowhere.

This image of Batman, perceived malignant by faithful Bat-fans, haunted the character for decades until Frank Miller’s The Dark Knight Returns in 1988. An influential, if troublesome graphic novel starring a much older and angrier Bruce Wayne, Returns ushered in an obsession with grim and gritty stories in the late ‘80s; for better or worse, it was this period that gave readers Watchmen and The Killing Joke, another horrifically dark Batman tale.

As Batman’s comics got darker, so did his live-action persona. In 1989, Tim Burton directed Batman, which Bat-fans celebrated as a true, honest vision of what Batman should be. Although the film was still family-friendly and generally inoffensive, Burton’s gothic sensibilities meshed well with the character, allowing the family film to tease bits of darkness. After an even grimmer follow-up in Batman Returns, the Emmy-winning Batman: The Animated Series proved that Batman can be many things at once: He can be a vengeful crusader and also a Happy Meal toy at the same time.

This was Batman in the ‘90s: The character had broken free of the Batusi with enough dark comics to fill a library, but he still had toys and cartoons and Batman Forever. But there was a threshold Joel Schumacher crossed in Batman & Robin, a surreal movie that was darkly comic and comically dark. The movie bombed so badly that its filmmakers have apologized for it on multiple occasions. Batman & Robin “killed” the franchise, necessitating a reboot in 2005’s Batman Begins from Christopher Nolan. The failure of Schumacher and Nolan’s recipe for revitalization wrote the playbook of today’s dominant strategy in Hollywoo: Any franchise can blow up with enough money and repressed anger. It hasn’t worked every time — see 2015’s Fantastic Four — but there are no signs of this strategy stopping anytime soon; next month, Lionsgate will release Power Rangers, an angsty reboot of the 1993 television series.

But during Nolan’s era — which spanned 2005 to 2012 with the release of The Dark Knight Rises — rival superhero films began changing things too. In 2008, Marvel released the bright and breezy Iron Man, the first Marvel superhero movie with the company’s direct involvement, which evolved into the even brighter and breezier The Avengers. After Nolan’s time on Batman finally ended, the character’s dark reputation stayed in last year’s Dawn of Justice due in part to Snyder’s taste for exaggerated medieval aesthetics.

But The Lego Batman, and indeed the rest of 2017, signals a return to a lighter Batman. While the comics are darker than ever — Tom King’s Batman is pretty dang moody, while Scott Snyder’s All-Star Batman is politically charged — Batman in movies and TV is looking pretty upbeat. (Gotham doesn’t count.) While DC has promised a more upbeat Justice League, Batman is probably at his funniest in Justice League Action on Cartoon Network, and unexpectedly, Justice League Dark. While Justice League Dark is what it sounds like — it’s rated-R and people die like, everywhere — Batman himself is a surprising source of comedy playing the straight Scully to a bunch of magical Mulders. His nondescript “Hmm.” after every bizarre happenstance had fans rolling at the New York premiere.

The Lego Batman Movie is a great film, but it’s even more noteworthy because of its time and place. 2017 is a peak year for superhero movies engineered to create interconnected narratives for the purpose of franchising. (Lego Batman is technically a spin-off of The Lego Movie, but references to that film are virtually non-existent.) Sandwiched between Dawn of Justice and Justice League, The Lego Batman is an outlier. One day, as the cycle proves, Batman will get dark again. But that’s many more movies away from now.

The Lego Batman Movie is currently playing in theaters.