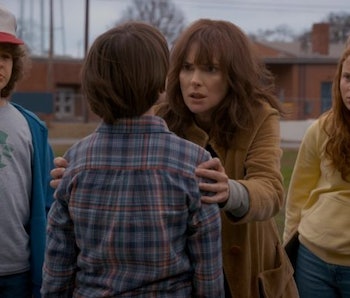 It looks like Hawkins Middle School’s favorite group of misfits will be sharing waffles with a newcomer: Max. Netflix has been steadily dropping new looks at the second season of Stranger Things, first revealing the Hawkins crew in full Ghostbusters gear and then releasing a trailer during the Super Bowl. The latest batch of images is all fairly recognizable stuff similar to Season 1, but one photo includes the show’s newest character.

The first image is all drama. Winona Ryder’s Joyce Byers clings to her son Will’s shoulders while his best bud Dustin looks on. He might even be relaying the emergency to the rest of their friends via that microphone headset. Something is clearly wrong, but Joyce and Dustin have seen some weird Demogorgon-based stuff before, especially with Will. Presumably someone who hasn’t faced an interdimensional being before stands to their right.

It’s Max, the second season’s newest character played by actress Sadie Sink. In the first Season 2 tease, one of the new episodes, entitled “Madmax”, seems to indicate that the new season’s first episode will focus on her.

When Sink was cast as the newcomer, Netflix described her as “a tough and confident girl whose appearance, behavior, and pursuits seem more typical of boys than of girls in this era. She has a complicated history and is generally suspicious of those around her.”

She definitely looks suspicious of whatever’s going on with Will.

Take a look at the rest of the new photos below:

Either the Hawkins Middle School students are wary of Will, or Will is wary of heading back to school after being trapped in the Upside Down.

Nancy Wheeler might have chosen to stay with Steve Harrington, but that doesn’t mean she isn’t still friends with Jonathan Byers.

Is this the moment Hopper sees Eleven return? We hope so.