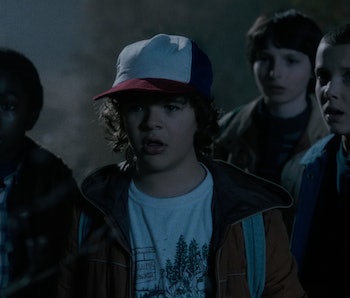 After weeks of teasing, Netflix finally announced Stranger Things would return for Season 2 sometime in 2017. Hooray! After a summer of terrible blockbusters, Stranger Things swooped in to become a full fledged phenomenon… but what can we expect to come next?

Nothing is really definitive at the moment other than slivers series creators Matt and Ross Duffer have dropped during interviews before the Season 2 green-light. In fact, just about the only definitive detail about the second season we know so far, other than the fact that the principal cast will be back and that it’ll take place in 1984, are the chapter titles. The Season 1 chapter titles gave some clever insight to the events of each episode, so it reasons Season 2 will do the same.

“Chapter One: The Vanishing of Will Byers”

The inciting incident of the series, local kid Will Byers is captured by the Demogorgon and pulls the citizens of Hawkins together to solve the mystery.

The “Weirdo” is Eleven, while Mike lives on Maple Street. This is also a clever reference to the Twilight Zone episode, The Monsters are Due on Maple Street”

This is the episode where Joyce Byers speaks to Will via a series of Christmas lights, but it also references Mike’s little sister, Baby Holly.

This is the fateful episode where Chief Hopper discovers the recovered body of Will Byers is fake.

”Chapter Five: The Flea and the Acrobat”

Science teacher Mr. Clarke explains the theoretical physics of the Upside Down using a metaphor about a tightrope walker only being able to walk backwards and forwards, but a flea on the same tightrope being able to go underneath it.

Here we get our first good look at the Demogorgon when Nancy Wheeler and Jonathan Byers visit the Upside Down.

Mike and the gang realize that El can use a sensory deprivation chamber to amplify her telekinetic powers to help find Will and Barb.

”Chapter Eight: The Upside Down”

Chief Hopper and Joyce Byers venture into the alternate dimension to find Will.

They seem fairly straightforward with a few curveballs thrown in there for good measure. Season 2 seems about the same. Looking back, the first season chapters makes obvious sense in retrospect.

Here’s out best guess on what to expect from each episode of Season 2.

The reference is obviously linked to George Miller’s 1979 movie Mad Max, and possibly references the wasteland of the Upside Down. Hopper also seems like a similar gruff loner to the lonely hero of Miller’s film, and Mad Max sequel The Road Warrior is the type of follow-up the Duffer brothers would be wise to use as inspiration for their own second season. The most curious aspect of the episode title is the single-word, almost childlike spelling, so it most likely refers to the new kid character Max, who, according to TV Line, is a “tough and confident’ 12-14 year-old female whose appearance, behavior, and pursuits seem more typical of boys than of girls in this era.”

“Chapter Two: The Boy Who Came Back to Life”

Like the first chapter of Season 1, this one obviously refers to Will Byers. His funeral led the people of the town of Hawkins to assume he was dead, and yet he was miraculously saved. The Duffers have said Season 2 will address the fallout of the events of Season 1, so it’ll be interesting to see how the larger conspiracy of his supposed death ripples throughout the town.

Season 2 will pick up a year after the events of the first season, which began on November 6, 1983, so it’s safe to assume well see our characters again around Halloween in 1984. But, what exactly is the pumpkin patch of the title? Will the Duffers take that promise to ape the sequels of James Cameron to heart so we get to see an entire row of Demogorgon eggs a la the alien queen in Aliens?

Maybe Mike, Dustin, Lucas, and Will upgrade Castle Byers into a palace? We never really got to see them all hang out in Will’s makeshift hideaway in the woods, and the peeks at his own little fort were in flashbacks and projected by El in the Void. This one is tough and unspecific, and we’ll have to wait to see exactly what it’s referencing.

One of the best detective moments for Chief Hopper in Season 1 was when he gets a look at the security tapes of the Hawkins National Laboratory from the dark and stormy night El escaped. “See any rain in those tapes?” he then asks his deputies. Mike and the gang first discovered El during that storm, so we’re either getting a flashback to then, or its a sly reference to them being reunited with El once again. By this chapter in Season 1 things were really ramping up with Hopper finding the Rift, and Nancy and Jonathan starting their fight with the Demogorgon, so expect the same kind of multifaceted action around this point in Season 2.

The title misspells “polliwog,” another name for a tadpole, which are the aquatic larvae of amphibians like frogs or salamanders. You know what else from Stranger Things looks like an aquatic amphibian larva? You guessed it, those gross Demogorgon offspring seen crawling out of Barb’s mouth in “The Bathtub,” and coughed up by Will into the sink at the end of “The Upside Down.” What did that little creature become down in the sewers of Hawkins? Hopefully we’ll find out.

Here’s another one that might be too vague at this point. If “The Palace” isn’t a reference to Castle Byers then maybe this could be instead. It could also refer to the little blanket tent Mike built in his basement to keep Eleven hidden from his mom. Is the Upside Down version of Mike’s basement tent the place El has been hiding this whole time?

Even more ambiguous than “The Body” or “The Bathtub,” “The Brain” has infinite possibilities right now. If anything, it’s referencing the source of Eleven’s telekinetic powers, and considering we might find out about experiments One through Ten this time around, maybe “The Brain” alludes to their hive mind.

Still ambiguous? Yes. Even more intriguing? Absolutely. This is the last episode of the second season, so it can’t be some casual reference to the brothers we already know about like Mike, Will, or Jonathan. Our best guess is that the lost brother of the title refers to the experiments before Eleven. Terry Ives might have had another kid, or maybe another unwittingly pregnant MK Ultra test subject had a boy that ended up like El. We’ll have to wait until Stranger Things 2 drops in 2017 to know the truth.