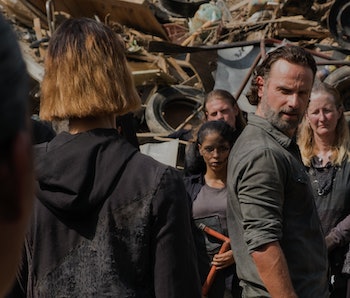 War is coming to the apocalypse. The seventh season of AMC’s The Walking Dead returns on February 12, picking up right where things left off: our gang reunited and the beginning of a partnership happened between the colonies to take down Negan (Jeffrey Dean Morgan) and his saviors.

Season 7, according to producer Scott Gimple talking in an AMC promo, was “very much about these characters and the audience finding their way forward from an incredible trauma.” The season began where Season 6 left off, with pretty much every main character — except Morgan and Carol — confronted by Negan and his Saviors, payback for when Daryl, Abraham, and Sasha killed off a bunch of their crew with a rocket launcher in the Season 6 mid-season return. Negan returned the favor in kind, killing off Abraham and Glenn without remorse and taking Daryl as his prisoner.

While Daryl suffered under the Saviors and Rick (of Alexandria), and Gregory (of Hilltop) struggled to keep up their supply quota for the Saviors, some of the other characters took it upon themselves to seek outside help and begin alliances. Tara (Alanna Masterson) found a remote camp of survivors, Oceanside — all of whom are women — while Carol and Morgan befriended the Kingdom, a peaceful compound “ruled” by an eccentric ex-zookeeper and community theater actor Ezekiel.

Not everyone was exactly on the same page, though. Carol, who is completely unaware of Negan’s devastation inflicted upon her original family, has carved a quiet life of her own not far from the Kingdom. In the mid season finale, however, she was pulled back in after one of the Kingdom’s soldiers begged her to return, warning that Negan would destroy everything.

Maggie has been mourning her husband Glenn, but having lost family before, she’s gotten over it without abandoning her feelings wholesale. In a recent interview, Lauren Cohan said her character will be fueled by revenge for Glenn. “I think that she’s grasping for somewhere to put her energy and her pain,” she said. “I think ultimately what she and the entire group come to is that these losses can’t be in vain, and we fight on in honor of our family.”

Pretty much all of these colonies are reluctantly working for Negan, and who wouldn’t be? The bat-wielding maniac takes the majority of their food, weapons, and gear and expects them to scavenge for even more. So there’s a mutual agreement in wanting to take down Negan, but who among them would be willing to take the risk? That’s a question the next half of Season 7 will have to answer. If Season 7’s first half was about dealing with trauma, the next half will be about moving forward, no matter what is in the way.