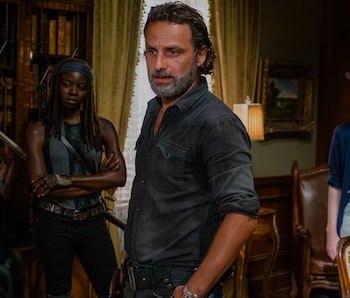 Negan has made life a living hell in the walking apocalypse, but The Walking Dead’s seventh season winter finale left things on an uncharacteristically uplifting note. After torturing Walking Dead fans the entire fall with his creepy psycho-sexual sadism and monotonous ‘80s sitcom music, Negan put Alexandria on notice that they’re in a “serious, serious hole” after an attempted murder by Rosita (using the bullet made by Eugene). But with the colonies beginning to unite, it’s Negan who might be in that serious, serious hole. Or maybe not.

Here are the few questions to think about going into The Walking Dead’s Season 7 return.

5. Who was that person watching Rick and Aaron?

Rick and Aaron spent the first half of the show’s winter finale traversing a dangerous swamp to get supplied hold up in a rinky-dink shack. They managed to survive, while a note declared: “Congrats for winning, but you still lose.” The note would later be unfortunately poetic when it’s discovered by the Saviors, but earlier, a mysterious figure watches Rick and Aaron from afar. This person maybe (or maybe not) reappears again, with the audience using their perspective while Negan and his Saviors confront Alexandria later in the episode.

Whoever this person is, they’re a neutral party for now, but it’s very likely their real motives will be revealed soon.

4. When is Carol coming back?

Carol has outlasted (and outshined) her comic book counterpart in the TV show, leaving her fate up in the air. Though she’s retreated into her own corner of the apocalypse, she’s too much of an asset for Alexandria — and too close to them personally — to leave them to the Saviors. She rejected a plea by Richard and Morgan to join them in the winter finale, but like the rogue badass she’s become, she’s probably going to come in at the last minute when they need her the most. She wouldn’t be as cool if she didn’t.

3. What will it take for all the colonies to unite?

Hilltop, Alexandria Safe-Zone, and the Kingdom are three distinctly different sanctuaries with three distinctly different needs. While they just barely match the numbers of the Saviors, they may be way outmatched in warfare. So what will it take for all three colonies to unite knowing they could be marching to their doom? It’s going to take a lot more than supplies to get them to team up. At what cost?

2. Will Daryl return to his old self?

Although Daryl at last reunited with his friends in Alexandria, poor old Daryl has been shook good. The mental agony has paid a toll onto Daryl, leaving him vulnerable just as everyone will depend on him to become the old crossbow-shootin’ BAMF he used to be. Like Carol, Daryl might finally come through at the last minute, but it will take awhile before he can suit up in his old vest and hop on his Harley again (if that thing’s still even around).

1. How long can they keep this up?

While Jeffrey Dean Morgan has kept up a killer (pun intended) performance as Negan, The Walking Dead has suffered from severe pacing issues since his arrival. Coupled with his exhausting sadism and tired bad guy routine, the show has been hemorrhaging viewers week after week. It’s no question that The Walking Dead will milk the tension and drama between the colonies and their alliance for as long as it can, but that threatens everyone to tune out just as it gets to the inevitable: War. And nobody should miss out on that.