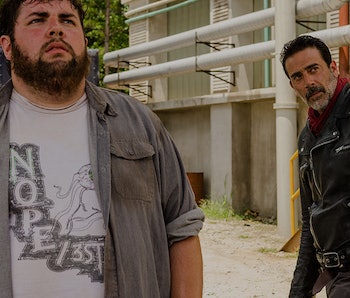 Roughly halfway through “Sing Me a Song,” Negan becomes the main character of The Walking Dead, a show which once sported a fairly robust ensemble. Chastened, scattered, and killed, that group of characters has been pulled into orbit around a bat-wielding star. This is even true of Rick, who doesn’t simply share screen time. He loses it to his oppressor. America’s most popular show is now The Negan Hour, With Occasional Zombies.

On a meta level, this makes sense. It reinforces how utterly powerless our usual heroes feel; how dominated they are by a one-man empire. They have to skulk about, plotting in their own ways to regain control. If we hate Negan for this, then it’s to the show’s benefit in theory. There’s just one small problem: Negan is awful. That is not to say that he’s a bad guy, which he is, but that he is completely insufferable — neither fun nor compelling to watch. He is a played-out cliché of a character type wrapped around a personality that makes the zombies seem thoughtful. The performance is a cut-rate version of Heath Ledger’s Joker or, even worse, a cut-rate version of Jared Leto’s Joker. The only really compelling thing about Negan is that he terrifies homophobes, which is kind of fun.

“Sing Me a Song” at least interrupts the “Ooooh he’s such a psycho, what will he do next?” routine with some moments in which Negan displays hints of gentleness. He apologizes to people for being a jerk and plays with a baby. It’s supposed to add yet another layer of unpredictability to him while also perhaps humanize him a bit. It doesn’t. We already know that he’s “unpredictable” in the sense that he’ll just do whatever the writers feel like having him do to shock the audience. And who’s really going to warm up to him as a person after getting it hammered in what a monster he is for so many hours of television? I imagine this is even less welcome for fans who like him because he’s “badass or whatever.”

This episode also continues to stretch any sense of credulity that someone like Negan would last this long in this world without getting capped. After Carl successfully infiltrates the Saviors’ compound and offs two of them, Negan leads him on a grand tour, during which it becomes ever more apparent what a wannabe king he is, what with having others kneel and his gross harem. This excursion then extends to a day trip back to Alexandria, wherein Negan is within the community on his own, and no one caps him or even tries to capture him. Come on. How the hell is a guy who doesn’t immediately execute would-be assassins still breathing?

It’s still not clear whether the Saviors are following Negan out of cult-like devotion or fear. It’s probably supposed to be a mixture of both, but The Walking Dead is never great at juggling more than one idea at the same time, and the nature of his leadership seems to change based on the needs of the scene in question. It would help if we could get inside the heads of more than the two Savior followers we’re given (Dwight and Sherry), but The Walking Dead is also very poor at granting interiority to anyone outside the main credits. (To be fair, this is a frequent problem with ensemble dramas. Remember how Lost featured a group of nearly 50 survivors, and only a quarter of them were ever important?)

With Negan and Carl’s adventures together occupying most of the interminable 90-minute runtime of “Sing Me a Song,” the rest of the cast get sent on little subplots. Rosita and Eugene argue a lot over him making her a bullet. Michonne captures a Savior in her own Negan assassination attempt. Jesus is still doing a lot of down-low truck hanging on. Spencer conveniently stumbles upon a zombie with a list of supply caches, while Rick and Aaron even more conveniently stumble upon a weapons cache. (These are possibly all hidden by the same guy, which is an awful lot of convenience for one episode.)

After six episodes of a slow burn, everyone is abruptly being set up for some kind of confrontation in next week’s midseason finale. But is anyone truly in suspense here? Besides the fact that viewers intellectually know that the big bad won’t bite it halfway through the season, nothing which has taken place thus far has even prepared them for the possibility that something important will happen. There’s a difference between place-setting and building something up, and this season of The Walking Dead has done a lot of the former and none of the latter.