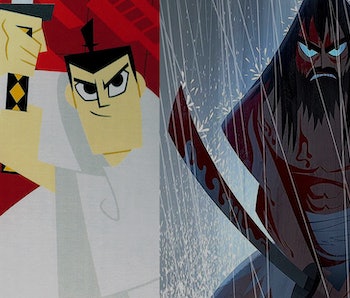 Wow, a lot of brutal stuff happened to Jack in the last few years. He’s not looking great, but Adult Swim’s reboot sure is.

The first full trailer for Genndy Tartakovsky’s Samurai Jack dropped this week, confirming a few updates to the reboot. It’s been 50 years since the last time we saw Jack, and Aku seems to have taken control of much more of the world. Time, Jack says, doesn’t affect him the same way anymore, so he’s not exactly 50 years older.

We’re introduced to a world that resembles feudal Japan, only it’s controlled by Aku’s dark technology. The trailer follows several identical female assassins as they hunt Jack, “the Samurai”. The most notable changes here are musical and visual: In this new Samurai Jack, attacks actually draw blood, and the thundering soundtrack under the action sounds like club music. Samurai Jack has always adored digital music, but this feels produced in a way the old episodes’ soundtrack couldn’t match.

As a final nod to OG fans, we hear Jack whisper the words to his old theme song to himself. “Gotta get back, back to the past …” he says, ruminating on what his next steps should be. Judging by this trailer, he’s going to be a lot less hesitant about cutting bad guys up.