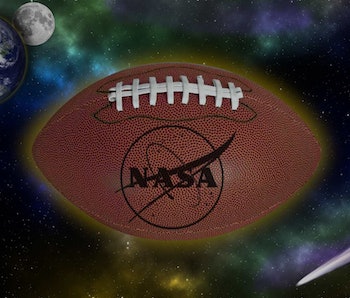 Spaceflight and space science is as American as the Super Bowl. So when you have Houston hosting the biggest game of the year, it will naturally come to some people’s mind that it’s a perfect opportunity to marry space and football and celebrate both spectacles.

We should’ve been more wary about the nerds.

The space nerds were everywhere. They populated social media. They showed up at the stadium. They even came up during the commercials. What kind of country exactly do we live in where the Super Bowl becomes dominated by space nerds??

If you missed the entire game or your frustrations over the Patriots winning has washed away your memories of the entire thing, here’s a quick recap of how the country’s space nerds celebrated the Super Bowl and, you know, nerd’ed up the entire thing.

We at Inverse are not the biggest fans of the man who is arguably America’s most prestigious space nerd. We have good reasons, I swear. But he’s also just a weird guy who tends to overindulge in too much pop culture minutiae, to the point where it ruins the things we once loved (RIP hip hop and Star Wars).

Last night, however, Tyson went on a tweeting spree and began to bludgeon his followers with “football astrophysics.” I won’t belabor this, because you can read more about it here, but it’s worth noting that many of these facts had nothing to do with football. Case in point:

2. NASA Reminds Us the Space Station is Still King

While we like to measure distance in terms of football fields, NASA prefers a different method. The International Space Station is a $1 billion piece of technology that is the size of a football field. And the agency put out a nice visual of this comparison last night during the game.

NASA also decided to put out its own set of football-related space facts last night through its Tumblr page. Among the highlights: the new Space Launch System rocket infrastructure is taller than the length of a football field; the crew of the space station will saw the sunrise and sunset twice before the entire game was over; and it would take over 3,000 hours for a football to reach the moon.

3. Bill Nye Gets All Ten-Dimensional on Us During a Commercial

Our favorite scientist from our childhood decided to make an appearance in Persil ProClean’s new commercial for a laundry detergent, which apparently delivers “ten dimensions of clean.” This is obviously dumb non-science used for humorous effect, but still, it’s nothing but facepalm-inducing. C’mon Bill….

4. Astronauts Throw a Football for the Longest Distance Ever in Space

This actually occurred a few days before the Super Bowl, but it’s too epic not to share. NASA Astronaut Tim Kopra threw a football for 564,664 yards in space, while aboard the ISS. Why? The space station zooms around the Earth at over 17,500 mph. Add the distance together, and you get the longest Hail Mary pass of all-time. It’s literally out of this world.