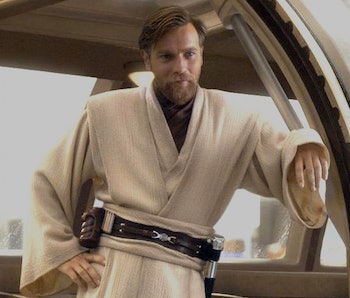 Despite the excitement over the possibility of seeing a ghost of Darth Vader in the form of Hayden Christensen returning as Anakin Skywalker, it’s more likely The Last Jedi will use a different Jedi spirit: Obi-Wan Kenobi.

So far, the episodic Star Wars movies have made mostly safe choices. The popularity of The Force Awakens can be attributed to literally everyone loving Han Solo and Chewbacca combined with an accessible, easy-to-follow story which was very similar to the original Star Wars. Bringing in Anakin Skywalker as played by Hayden Christensen would be a risky move because Hayden’s Anakin is unloved by the majority of fans and general audiences alike. That means that the conventional wisdom of playing it safe points toward the powers that be bringing on Ewan McGregor’s Obi-Wan Kenobi as a ghost over Hayden’s Anakin.

There are a lot of good reasons to think this will end up happening. First, Obi-Wan’s voice already spoke to Rey in The Force Awakens, and Ewan McGregor provided part of the dialogue. After an old Alec Guinness line was manipulated to sound like “Rey,” Ewan McGregor said “these are your first steps,” at the end of Rey’s dream-like Force vision.

Ewan McGregor is also the most universally praised aspect of the Star Wars prequels, making his return as Obi-Wan’s ghost something which is easily marketable. McGregor has publicly said he would do more Obi-Wan movies, and there’s been rumors that those movies are on hold because Obi-Wan will feature in the new saga films. That’s not to mention that pesky fan theory that Rey is related to Obi-Wan and not to any of the Skywalker clan.

The rest of the Star Wars world has also been hyped about Obi-Wan lately, too. The older version of the character is set to appear later this season on Star Wars Rebels, dueling with Darth Maul in the sands of Tatooine. Could all of this mean fans are about to experience a Kenobi renaissance? Maybe so. Think about it this way: Nothing says Star Wars more than Luke Skywalker speaking to the ghost of Obi-Wan Kenobi in a movie called The Last Jedi. Of course, a ghost of Obi-Wan Kenobi appearing isn’t necessarily mutually exclusive with a ghost of Anakin Skywalker, either.