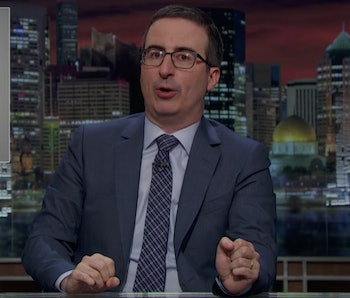 The big day is finally here. Between the Supreme Court nomination of Neil Gorsuch and all the other chaos of President Donald Trump’s administration so far, you might have forgotten about the significance of today: It’s Groundhog Day. But more importantly than that, it’s the day Last Week Tonight host John Oliver designated as the “Day to Remind Party Leaders That Primaries Suck.”

In May 2016, voters of all political stripes were becoming understandably frustrated by the arcane and inaccessible primary systems. Oliver, true to form, produced a lengthy segment explaining some of the crazy nuances built into that system and showed that, for both Democrats and Republicans, the ability to pick presidential candidates is less in the hands of the voting public than most of us would like to believe.

Unfortunately for us, though, Oliver noted, “We only get angry about the primary process during the primary process, when it’s impacting the candidate we care about.” His solution for that? Pick a day where voters contact the heads of their respective parties to demand the rules be changed.

That day is today, February 2. “Now that will be easy to remember,” Oliver said, “because it’s Groundhog Day, which does seem appropriate because unless this primary process is fixed, we are all destined to live through the same nightmare scenario over and over again until the end of fucking time.”

If you were one of these people who felt disillusioned by the primaries, then today’s the day to contact party chairs and make your voice heard.

Only the Republicans have a chairperson. (Ronna Romney McDaniel was appointed January 19.) DNC chair Debbie Wasserman Schultz stepped down just before the nominating convention amid a scandal regarding her abuse of the party’s infrastructure.

There’s still plenty you can do if you’re still fired up about the primaries and want to see them run smoother in the next election. You could contact your senator or representative, as they are all party insiders as well, to ask that they keep your concerns in mind.

For now, let February 2nd be a reminder of how fucked up the primaries were, where we sit in the shadow of the frustrations they unleashed. Then, if you’re so inclined, channel that motivation to ensure the end of this “nightmare scenario” before the “end of fucking time.”