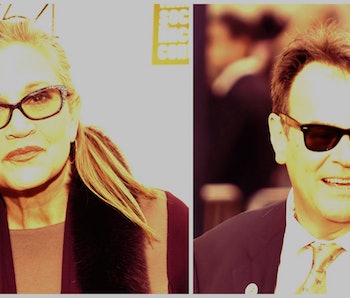 The late, great Carrie Fisher was famously outspoken about her drug use, but one story she never mentioned to the public was her experience with Owsley Acid, a type of LSD. This story was brought to light in Dan Aykroyd’s new tribute to Fisher, in which he recounts the particular joys of taking this once-notorious brand of acid.

Writing in Empire, he retells a story in which he and Fisher took Owsley then “flew up to Reno, rented a wagon and checked in for three days of full-on weeping to Christmas classics.” He called the experience “[certainly] one of the planet’s greatest occasions where LSD was a factor.”

Owsley acid was named for its creator, Owsley Stanley, who was the first person in the United States to mass produce high-quality LSD. In the 1960s, after he had served 18 months in the U.S. Air Force in the previous decade, he began to synthesize LSD in a lab using the profits he had made from his sales of self-produced methedrine. The term “Owsley acid” is actually an umbrella term for the many types of LSD Owsley produced: His most famous products were “White Lightning” — he made 300,000 doses of this particular type — and “Monterey Purple,” which he produced in 14,000 doses. It’s unclear which type Fisher and Aykroyd took, but it’s likely that it came in tablet or capsule form — and was of very high quality.

What differs between different types of LSD batches are their purity and the amount that is included in each dose, and it’s thought that Owsley’s acid was particularly pure; the Oxford English Dictionary defines “Owsley” as a noun “describing a particularly pure form of LSD”. Purity determines how long a dose of LSD will stay in the body — and how quickly and potently it will take effect. However, the central chemical, lysergic acid diethylamide, always stays the same; as one Bluelight user put it, “It’s either LSD or not LSD.” (Of course, it’s always possible that less scrupulous dealers will sell different, LSD-like substances in its stead.)

By experiencing three days of emotional outpouring to visual and musical stimuli, Fisher and Aykroyd displayed the most common effects of LSD dosing: increased emotional sensitivity, together with heightened visual and auditory hallucinations.

Fisher and Aykroyd were not the only ones who partook of Owsley’s product. In total, he’s thought to have produced some 460 grams of LSD — a single dose is measured in micrograms — over his lifetime, a fact that was not missed by Ken Kesey and the Merry Pranksters as well as the Grateful Dead, who eventually took him on as a sound man (and financial backer).

More like this
Science
7.26.2022 1:00 PM
Some people with epilepsy find relief with CBD — but the market is murky
By Kaiser Health News and Eric Berger
Gaming
2 hours ago
League of Legends Star Guardian concept art is an emotional trip
By Robin Bea
Gaming
7.26.2022 1:00 PM
Xenoblade Chronicles 3 gave me emotional damage
By Hayes Madsen
Related Tags
Share: