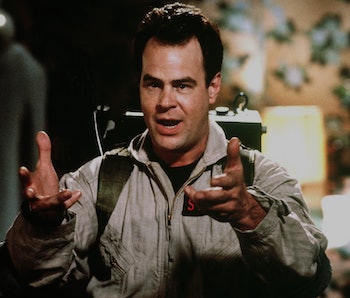 It seems as though a TV ad running in the UK has revealed the entirety of Dan Aykroyd’s cameo in the upcoming Ghostbusters reboot helmed by Paul Feig. The man who wrote the original is appearing in the new film as a cabbie who “isn’t afraid of no ghosts.”

We’ll make no assumptions of the overall film based on the cheese factor of this line alone. Your disappointment may depend on how much you want from a cameo that’s basically included solely so fans can go, “Hey! It’s Ray!”, though of course we know that this new Ghostbusters film presupposes that its team is the very first team of ‘busters. All we know for certain is that the new film has Aykroyd’s vote of approval, so there’s that.

While the footage of the new Ghostbusters film hasn’t gotten the most positive publicity, it’s a film with an undeniably talented cast and crew who seem committed to honoring the original classic. We’ll see how well they did when the new film debuts July 15 of this year.