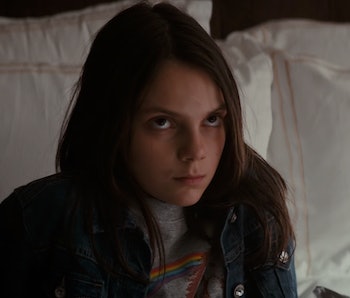 The hyped trailer for Logan released on Thursday offered viewers the first look at Dafne Keen’s Laura, aka X-23, and her own set of adamantium claws, which have two blades instead of the three that Logan, aka Wolverine has, as played Hugh Jackman.

The use of these claws confirm what many fans were already suspecting: Laura is actually cloned from Logan’s DNA, which is in keeping with her origins in Marvel Comics.

There was little doubt over Laura and her inevitable identity as X-23, who in the current comics is now Wolverine. Still, Laura’s recognized power set — mainly, her claws — weren’t seen until the newest trailer which released early Thursday morning. Cloned from Wolverine’s DNA, Laura is a badass killer and is also significantly younger than Laura from the comics. But perhaps she will grow up and become a true X-23, or even the next Wolverine, in future X-Men movies.

Logan, which is loosely based on Mark Millar’s apocalyptic graphic novel Old Man Logan, is set sometime in the near future after X-Men: Days of Future Past (last year’s X-Men: Apocalypse took place in the 1980s). Mutants have been wiped out, and their tales have become children’s comics.

Wolverine’s powers, confirmed by Mangold, aren’t what they used to be, and Professor Charles Xavier (Patrick Stewart) is also not the sturdy figure he used to be. But his lil hat is pretty sweet.

Watch the trailer for Logan:

More like this
Entertainment
Jan. 26, 2023
Shazam! Fury of the Gods trailer pits the family against Helen Mirren and her dragon
By Mónica Marie Zorrilla
Entertainment
Jan. 24, 2023
Harley Quinn: A Very Problematic Valentine's Day Special trailer casts a smutty spell over Gotham
By Mónica Marie Zorrilla
Entertainment
19 hours ago
The Batman: Part II — Everything we know about the Robert Pattinson sequel
By Gabrielle Bondi
LEARN SOMETHING NEW EVERY DAY.
Related Tags
Share: