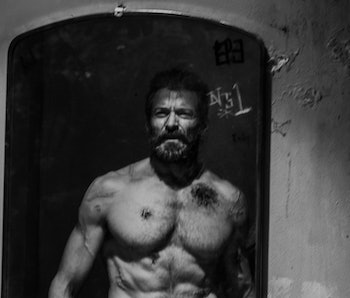 For centuries, Wolverine relied on his regenerative healing to not only stay ruggedly handsome, but to stay alive. It’s probably what kept him alive even after whatever virus or phenomena caused the extinction of mutants in 20th Century Fox’s X-Men continuity, but it still took a lot out of the man called Wolverine.

In a new photo from Logan director James Mangold, Wolverine looks broken, bruised, and scarred in a dingy bathroom probably somewhere in the southwest, where most of Logan is taking place.

In previous films, Wolverine’s regenerative healing worked almost like magic, pushing out bullets and repairing bones and tissue in seconds. You could cut him and in seconds he’d have the skin of a baby. But in Logan, which takes place years after 2014’s Days of Future Past (this year’s X-Men: Apocalypse happened entirely in the ‘80s), Wolverine’s powers aren’t what they used to be.

“In order to make a different Logan, and a different tone of a Wolverine movie, we felt like we couldn’t hold on to every tradition established in all the movies religiously,” said director James Mangold about the decision to alter Wolverine’s healing abilities, or else the filmmakers would “be trapped by the decisions made before us.”

“We imagined that it may have when he was younger, but with age, he’s getting older and ailing,” added Mangold. “Perhaps his healing factor no longer produces baby-soft skin. So we imagined he heals quickly, still, but it leaves a scar. The simple idea was that his body would start to get a little more ravaged with a kind of tattooing of past battles, lacerations that remain of previous conflicts.”

The trailers for Logan showed Wolverine with quite a few scars, but Mangold’s photo gives a nice hard look at the punishment Hugh Jackman’s ex-X-Man has taken, and will take, in next year’s Logan.