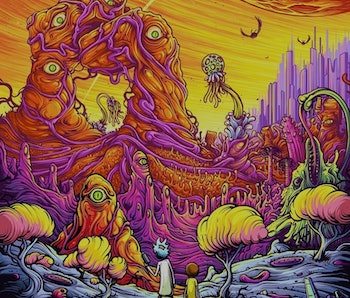 You’d think art galleries that host exhibitions featuring just Rick and Morty fan art would only happen in some kind of idyllic alternate dimension, but in reality, it’s happened right here in dimension A-001. Gallery 1988 relishes in a retro art style, and a recent collection of art work includes a slew of purchasable Rick and Morty-inspired fan art illustrated with all sorts of styles — and they hosted the Rick and Morty show in Los Angeles on January 13 to a stellar turnout.

Whet your appetite with some of the squanchiest pieces from the show, each featuring our favorite drunken mad scientist and his dimwitted-yet-likable grandson as we wait for the third season. This will offer you a great chance to revisit some of the most iconic moments from the first few seasons, but also catch glimpses of easter eggs from past episodes as well. Note: Our list employs the same arbitrary rating system used by Stealy from “Adventures of Stealy”.

This “variant” cover is done in an edgy, classic variant sort of style, featuring a presumably drunken crash-landing of Rick’s ship on a planet’s surface. It looks like the cover art for a dope graphic novel. Eight brapples.

Fans certainly love sneaking in a random Mr. Poopybutthole as often as possible, and this vintage pulp sci-fi novel cover is no different. The author of this Get Schwifty novel, Tom Kauffman, is indeed one of the actual writers on Rick and Morty; “Roiland and Harmon” are also obviously Justin Roiland and Dan Harmon, the geniuses behind the show. The relatively realistic depiction of these Cromulons is somehow even more unnerving than their animated counterparts from the episode “Get Schwifty.” They asked of us, “Show me what you got,” and this artist responded with “Action!” and “Thrills!” and “Adventure!” all for the price of 15 cents — so that’s obviously worth about 15 brapples, give or take.

Sure, it’s unnerving to see Rick depicted in more realistic textures, but artist Ashly Lovett relishes in the details: The pastel shading lends itself well to capturing the azurean hues of Rick’s hair and eyebrow(s) along with the crazed, wide eyes and drunken, drooling mouth. It’s worth at least nine brapples.

The silhouettes of Rick and Morty stand at the epicenter of a myriad of fractured dimensions that are roughly equal amounts bizarre: eyes, pools, squiggly things; they’re worlds that look straight out of No Man’s Sky. The pink, pastel hues are reminiscent of a plumbus extrapolated into almost a dozen different worlds. And as we all know, a plumbus is worth six-and-a-half brapples, so we’ll go with that one here.

“The Rick, the Bad, and the Doofus” — castlepop

An obvious riff on The Good, the Bad and the Ugly, this print features the robotic Evil Rick, our protagonist Rick C-137, and “Doofus Rick” from Dimension J19ζ7 each wielding … something. A smart man would bet against the one on the right. We’ll bet three brapples on Rick C-137.

“Total Rickall” stands as perhaps the best episode of Rick and Morty to date, mainly because it introduces so many of the series’s best characters. Chief among them is Mr. Poopybutthole, depicted here smushed in between Morty and Rick on the couch in the crowded living room. In this episode from Season 2, a creepy parasite plants false memories in the family, creating a whole slew of zany characters including Ghost in a Jar, Baby Wizard, and Sleepy Gary just to name a few. The colorful, deeply cartoony style lends itself well to characters like Tinkles, the delicate little lamb that farts rainbows and has a unicorn horn. 15 brapples for the number of characters depicted, minus five for the “real” people — so that’s a net total of ten brapples for this piece.

It’s Dimension 35C, and it’s got the perfect climate conditions for a special type of — TREE, Morty! Called the Megatree! And there’s fruit in those trees, and there’s seeds in those fruits. I’m talking about Megaseeds, th — ther — they’re incredib-bl-ly powerful and I need ‘em to help them with my research, Morty.

You’ll remember the uncomfortable plotline from the show’s pilot: A drunken grandfather convinces his grandson to stuff alien seeds up his butt for research purposes. Here, we see Dimension 35C in all its glory, drawn with colorful, swirling textures like something from Van Gogh if he were high on LSD, dreaming of foreign worlds, and had digital illustration tools at his disposal. All in all, an anxiety-ridden 13 brapples.

Holy squanchers, this piece is a glorious clusterfuck of references from the show. There’s everything from the Devil to a slice of pizza ordering “one large person with extra people.” There’s also the depressing and depressed butter-passing robot, Ants in my Eyes Johnson, Tammy riding on Birdperson’s back, a Cromulan, and more. Extra brapples for squeezing in so many references, and even more for the toilet paper.

Some things in the universe can be questioned; the nobility of Birdperson is not one of those things. This is a brilliant depiction that really captures his ornithological nature and avian visage. One brapple for each feather depicted.

“The Ricks Must Be Crazy” — Taylor Rose

Scary Terry (see further above) introduced us to a layered dreamscape a la Inception in “Lawnmower Dog” — but the Season 2 episode “The Ricks Must Be Crazy” introduced an even heavier amount of layered depth … with a tiny-verse within a mini-verse within a micro-verse that’s powering the battery in Rick’s car. In this depiction you can see a snapshot of each world (complete with one of the series’s most fucked up moments of the ship protecting Summer), all as the godlike creator of each realm looks on at his creation. That’s worth about four brapples; one per -verse.

“No Rest for the Ricked” — Matthew Rabalais

The warm mahogany, fire-lit color tones jive well with Rick’s snifter full of god knows what. Like many of the best among Rick and Morty fan art, “No Rest for the Ricked” is filled with easter eggs, including the butter-passing robot, a Gromflomite head mounted on the wall, a Meeseeks box, Rick’s badass guitar, a plumbus, and a burning picture of Unity in the fire. But best of all, we get a large painting of the same exact scenery, setting up an infinite link of paintings within paintings. The recursive Droste effect grants this piece of art an infinite number of brapples on account of the mise en abyme (“placed into abyss”) created PLUS six-and-a-half brapples for the plumbus on the shelf.

There’s still no word on when Season 3 of Rick and Morty will drop, but we’re looking forward to it. Remember to be nice to Dan Harmon about the whole thing, check out our favorite memes from the series, and rewatch the most important episodes.