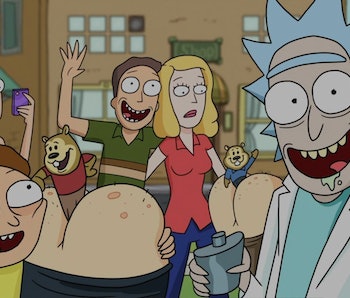 Who knew that the zany misadventures of a lovable half-wit and his brilliant alcoholic of a grandfather would produce some of the best and most beloved animated sci-fi in the modern era? We all miss Rick and Morty dearly, and though the show is littered with great moments — both absolutely fucked up and vaguely wholesome — along with lovable characters and memorable quotes, there’s also a lot of love to be had in its memeability.

There’s a lot there in the source material, whether it’s the weird squiggly mouth Morty gets when his mind goes blank, or Rick’s penchant for burping and getting absolutely wrecked from booze. The dynamic duo of an older brilliant scientist with a younger, less intelligent sidekick also riffs on everything from Doctor Who to Back to the Future and even the existence of Bernie Sanders as everyone’s grandpa.

Keep in mind that with Rick’s portal gun, the pair can conceivably go into any among the infinite universes out there, so a lot of fans have memed them going, well, just about anywhere.

The more serious Rick and Morty memes deal with the awkwardness of life but also the thinly veiled cynicism that flirts with, how you say … sociopathy? Fans are absolutely rabid in anticipation of Rick and Morty Season 3, so there’s also a bit about that eager anticipation floating around in the broader memescape. Rick and Morty always strives to be a meta-commentary on itself, human relationships, the glory of science, and really just how damned hard it can be to be a human.

So here are some of our favorite Rick and Morty memes.

1. A lot of the show’s one-liners have an endless number of uses.

3. For when things get, well, weird

4. When the reality of adulthood sets in …

5. For when life gets tough, just remember …

7. And you can’t forget one of his catchphrases.

8. Squiggly lips is all of us feeling socially awkward.

9. Nobody knew how sad butter-passing could be until it just was.

10. On the plus side, it can be used to diss any manner of technology.

14. Even Bernie vs. Hillary is featured.

15. Really, Bernie-Rick is a popular one.

16. Rick’s foulmouthed brilliance is in direct opposition to the Doctor’s.

18. Rick and Morty and Scooby Do and Johnny Bravo!?

19. Rick is the everyman alcoholic who we somehow still like despite how much they fucked us over.

20. Booze as escapism, though!

21. Pros and cons of being friends with a person like that:

22. Birdperson has had a rough go of it, as we know all too well, but who knew the aviary-sapian also moonlights as Lil Wayne?

24. The show can get pretty self-critical.

25. Krombopulos Michael is George R. R. Martin: “I have no code of ethics. I will kill anyone, anywhere. Children, animals, old people, doesn’t matter. I just love killing!”

26. The Frustration and the Fury that is procrastinating a paper

27. When spelling suggestions got too real

28. There’s a lot of solidarity while we all wait for Rick’s release.

29. Everyone’s thoughts as we wait anxiously for Justin Rowland to release Season 3:

31. How people feel when they finish Season 1 for the first time

Season 3 of Rick and Morty has no confirmed release date yet, but you might be able to expect it within the next few months, broh.