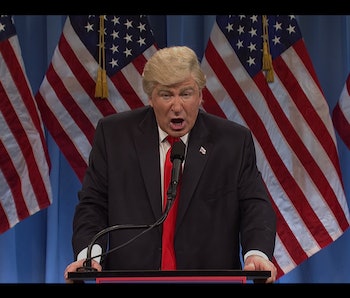 Alec Baldwin’s Donald Trump showered the audience with pee puns last night, in a press conference sketch that time may prove to be more accurate than we can imagine. Baldwin and the SNL writers pulled few punches, mocking Trump for the lack of relevant celebrities at his inauguration, his shaky promises about jobs, and of course, the unverified bombshell memo that alleges Russia has compromising video footage of Trump that involves prostitutes and watersports. Throughout the sketch, no matter how hard Baldwin’s Trump tries to stay on message and let the reporters’ urine inquiries roll off his back, he makes repeated slips that suggest the allegations are true. And according to psychological theories surrounding so-called Freudian slips, this might not be too far from reality.

“No, no. I am not talking about the pee-pee,” says Baldwin’s Trump in response to a reporter’s question. He freezes, mouth agape. “Because it didn’t happen, and it wasn’t as cool as it sounds. Next question!”

A Freudian slip like this makes for great comedy, but according to Psychology Today, these slips aren’t really that Freudian. “Two conditions increase the risk of making a so-called Freudian slip,” explains Jena Pincott. “One is the thought that you’d rather suppress. The other is a stressor, a distraction, time pressure, or a competing mental agenda.” A looming scandal based on unverified reports of golden showers certainly seems to qualify as a thought Trump would rather suppress, and a televised press conference could be characterized as a stressor. So if the report is true, this theory explains how Trump is likely to slip into pee-soaked language at stressful press conferences where he’s actively trying not to talk about urine.

Of course, a real-life slip probably wouldn’t be as over-the-top as Baldwin’s portrayal. But it’s still fun to imagine pundits’ delight if Trump actually said anything like Baldwin’s absurd claim that, “I am going to bring a thick stream of jobs back into this country. The biggest, strongest, steadiest stream you’ve ever seen.”

You can watch the entire sketch in all its golden glory here:

More like this
Entertainment
Jan. 27, 2023
Onyx the Fortuitous and the Talisman of Souls is a cringe comedy as overlong as its title
By Andy Crump
Culture
Feb. 2, 2023
After Harry Potter, Daniel Radcliffe Obviously Had to Play a Farting Corpse
By Alex Welch
Culture
Feb. 1, 2023
If The Last of Us Made You Bawl Your Eyes Out, You Need to Revisit This Zombie Rom-Com
By Mónica Marie Zorrilla
LEARN SOMETHING NEW EVERY DAY.
Share: