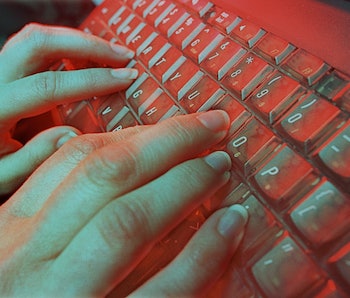 The intelligence memo alleged, among other things, that Trump conscripted Russian prostitutes to pee on each other in a Moscow hotel room while he watched. The porn-consuming public evidently wanted to see what that was all about. Similar trends were observed for other search terms, like “pissing” and “Donald Trump,” which both saw increases of well over 200 percent within the same time frame as “golden showers.” Whether the heightened searched traffic was the result of simple curiosity or newly piqued interests, it’s tough to say.

But perhaps most interesting of all Pornhub’s observations around the “golden showers” search term was its revelation about the age groups that most frequently seek it out.

According to Pornhub’s data, frequency in searches for “golden showers” increases sharply and steadily in proportion to age. Persons 65 years old or older — Trump’s generation — are 75 percent more likely than any other age group to search for the term. With this in mind, it seems like Trump’s sexual curiosities (if indeed the memo in question proves truthful) are much more aligned with his temporal peers than most would realize. The youngest demographic (also the least likely of any age group to have cast a ballot for Trump) are by comparison widely uninterested in “golden showers.”