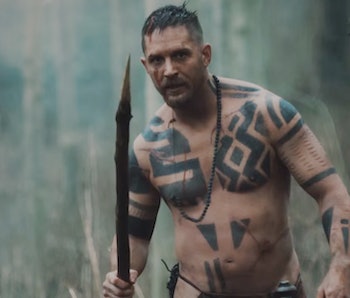 What is Taboo? FX’s hypnotic new series — starring and co-created by actor Tom Hardy along with confidant Steven Knight and Hardy’s dad, the delightfully named Chips Hardy — seems straightforward enough. James Delaney (Hardy) returns to dreary Regency-era London to claim an inheritance on his dead father’s shipping fortune, which includes a particularly sought-after piece of land in the United States called Nootka Sound. He also must deal with the fallout from a seemingly almighty trading syndicate called the East India Company who wants to claim the land for themselves. If that sounds a bit too bland and historical for you, fear not.

If you’re still wary of all that Taboo has to offer, then hear us out about how the show might fill the gap left by some of the best shows either cancelled or in between seasons at the moment.

Taboo immediately reminded me of Cinemax’s woefully underrated series The Knick, which seems to be in some kind of pre-cancellation holding pattern after [semi-spoilers] leaving the fate of a very important character up in the air. Both shows are about basically unlikable lead characters trying to conquer their own nature, which will inevitably lead to their downfalls.

Beyond being grimy, old-timey historical dramas, they’re both shows that use their relatively simple premise — one is ostensibly about the employees of an early 20th century New York hospital, the other about the battle between a prominent trading company and a small individual trying to eke out his own business — to tell bigger thematic stories about quote-unquote civilized gentlemen parading around their period-appropriate social strata and acting like anything but. Civilized or uncivilized, these are bad people trying to navigate a means to an end. — Sean Hutchinson

Showtime’s tragically short-lived gothic drama Penny Dreadful — while more overtly supernatural than Taboo — shares much of its DNA. Aside from their Victorian London settings and occult trappings, the main trait the two shows share are atmosphere, tone, and glorious scenery-chewing. Penny Dreadful was essentially a vehicle for Eva Green to Eva Green the fuck out of your television. Entire episodes were dedicated to her writhing around, possessed by demons; tragically repenting her past sins; flirting about a mutual interest in taxidermy; or showing up to elegant ballroom parties alone, head held high like a goddamn queen. One memorable scene simply had her recite a Tennyson poem on a windowsill for a good five minutes of screen time. The show was unabashedly indulgent, dripping with flowery dialogue and scenes that were actor showcases more than anything resembling plot. But it worked because the actors were all powerhouses, the atmosphere was so rich, and the world so delicious. There simply isn’t much television like it today — television that hardly cares about twists or plot but simply marries the sensibilities of the theater with the budget of cable.

Taboo is to Tom Hardy what Penny Dreadful was to Eva Green — he is Tom Hardy-ing the fuck out of your screen. Entire scenes are dedicated to him brooding, prowling, and espousing lines like “I have sworn to do very foolish things.” Whether they serve the larger plot hardly matters, because the experience of watching a master chew on such ornate scenery is such a blast. — Lauren Sarner

Beyond Tom Hardy playing a burly and imposing threat with an interesting accent, Taboo also shares more than a few characteristics with co-creator Steven Knight’s other series, Peaky Blinders. Knight seems determined to highlight the seedy underbelly of his home country’s history.

Taboo is Knight exploring the other side of the Peaky Blinders equation. By Season 3 of the latter, Knight’s anti-hero Tommy Shelby had created a criminal empire that put him in a palatial estate and in charge of socio-economic decisions that had ramifications thousands of miles away. It’s the same kind of set-up with Taboo’s East India Company, lead by Jonathan Pryce’s Sir Stuart Strange, whose actions determine what is and isn’t an empire.

Strange is like if Tommy Shelby grew old, changed accents, and became too big for his already oversized britches. But whereas Tommy is the celebrated good-bad guy of Peaky Blinders, Strange is the straight up antagonist of Taboo. Knight has cornered the market on brazen dramas featuring moody men skulking around British slums, and if that sounds like your sort of thing then join up. — Sean Hutchinson

Between the ships and the East India Company, Taboo feels like a more mature take on the world of Pirates of the Caribbean or Starz’s Black Sails.

Both shows are set to the backdrop of old-timey ships and worlds brimming with ne’er do well characters. And like Taboo it has an intense, inscrutable anti-hero (played by Toby Stephens), dense dialogue, and copious amounts of backroom scheming. It focuses on the politics and economics of piracy: the psychology of a captain trying to stay in the goodwill of his crew; the ideological differences between pirates who fell into the lifestyle for different reasons; the abysmally unfair and intolerant mores of high society at the time. Black Sails is a slow burn and rewards the audience for waiting.

Similarly, while Taboo already has the elements people are probably hoping for from a Tom Hardy pirate-esque show — dramatic swaggering, threatening, incest, biting people, lines like, “I will return to you twelve testicles in a bag,” — it’s also taking its time to unfold. But like Black Sails, Taboo is keeping James Delaney’s backstory close to its chest and focusing on setting the stage and building the mood. It’s the kind of television that feels like a novel. But as Black Sails is a relatively niche show for this reason, it will be interesting to see if a star like Tom Hardy can make it more palatable to mass audiences or if people prefer more instant gratification onscreen. — Lauren Sarner