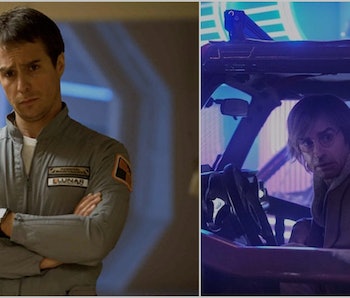 It may take place in a very Blade Runner-esque version of Berlin in 2052, but filmmaker Duncan Jones’s latest film Mute also technically takes place in the same universe as his debut feature, Moon.

Mute stars Alexander Skarsgård as a mute bartender named Leo who goes on a mysterious journey to find his missing girlfriend (Seyneb Saleh), and while in the seedy underbelly of future Germany he meets some unseemly surgeons played by Paul Rudd and Justin Theroux. How that will play out remains to be seen when the movie drops on Netflix sometime in 2017, but we do know how the world Jones created links to his previous work.

In the new photos released by Entertainment Weekly, the slogan “Free the 156” can be seen on the wall behind Theroux’s character (who is sporting a glorious mop of hair in what looks like a futuristic Jeep).

156 must refer to the number of clones revealed at the end of Moon who were kept a secret by a shady corporation called Lunar Industries. As Moon ends, lonely lunar miner Sam Bell (Sam Rockwell) heads back to Earth after the devious plot involving the clones come to light.

Jones tweeted this graphic featuring the slogan and an illustration of Rockwell’s character in December 2016:

The question of what exactly happened to the Sam Bell clones when the Moon protagonist arrived back on Earth is that his predicament seems to have created a kind of social movement against Lunar Industries that has lasted for a decade as Mute takes place 11 years after Moon.

This gives a bit more credence to the idea that Rockwell’s character will show up in some capacity in Jones’s new film as a supporting character, though his image could just as easily pop up in the background to add to the fabric of the world Jones created.