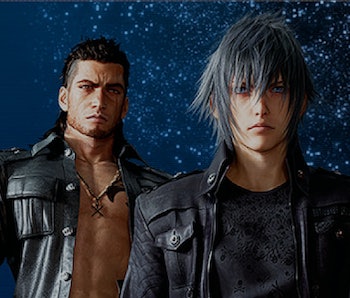 The launch of Final Fantasy XV was met with a good deal of high praise. People had been clinging onto the hope that the game would be the comeback the franchise deserved after a string of lukewarm games that failed to live up to the series’s legacy. Yet despite the relatively positive reception the latest has received, I don’t think we’ve achieved the glorious comeback we’ve all been itching for.

Don’t get me wrong; Final Fantasy XV is a perfectly likable game. It puts positive male friendships in the spotlight and it’s easy to invest yourself in these characters’ lives. The strength of their bonds emanates throughout both the quiet moments spent together around the campfire and frantic fights against towering beasts as the boys pull off combos in tandem. Fishing is fun and the food looks so, so tasty. The dungeons are winding labyrinths that are a pleasure to explore in a world full of endless slogs. Yet all of these bright aspects are lonely pillars in a deeply troubled game.

Square Enix heeded calls for an open-world Final Fantasy game after the 40-hour corridor run that was Final Fantasy XIII, but actually going out into the gorgeously rendered landscape … the world feels empty and lifeless, as if the developers forgot to add any sort of soul into Eos. It’s a beautiful place to imagine, but when you explore it feels a bit disappointing. Quests here, especially Hunts, do little to flesh things out as they’re mainly reduced to fetch quests with little indication that what you’re doing has any narrative value. Compare that to The Witcher III, which has already become a benchmark for open world RPGs, and Final Fantasy XV looks flat in comparison.

The story, too, borders on disaster. Cutscenes have been pasted in from the Kingsglaive movie with little introduction and dubbed over with music — rendering any exposition totally inscrutable. If you want to understand the overarching story, you’ll really need to go back and watch said movie, which is already something of a narrative nightmare. Perhaps this was meant to be a fun experiment in storytelling across mixed mediums, but the end result is sloppy and confusing.

The battle system shows great potential but never quite hits the mark. The camera has difficulty tracking the action, and it’s easy to simply mash your way through enemy encounters. Spells are little more than an afterthought, a mere shell of the magic from previous entries to the series. It all feels sadly shallow.

Final Fantasy deserves much more. It’s traditionally been a series that holds storytelling, wacky as it sometimes is, in high regard. It’s not patched in months after release as an afterthought, or left for fans to pick up in pieces from other mediums. Cindy deserves more than a cutscene pressing her boobs against your windshield as she gives your car a rub down, especially in a franchise once praised for writing strong female characters in a time when they were scarce. These were characters that, despite often being sexualized, had their own agency and stories. Final Fantasy deserves more than a cobbled together battle system that neglects nuance and a functioning camera. Yes, Final Fantasy XV has bright moments, but mixed with these larger faults things begin to feel very inconsistent.

This isn’t the end, though. Square Enix has shown that it’s listening, what with the patches, and it’s clear that Final Fantasy XV has that spirit we’ve sorely missed deep down. The trick is to avoid settling for something lesser when the next major Final Fantasy title inevitably rolls around. Let’s just hope it doesn’t take 10 years this time.