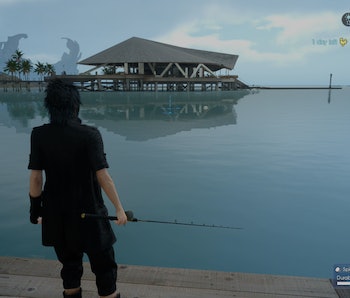 Final Fantasy XV includes many different activities to participate in, some of which are critical to your survival out in the world of Eos. There’s chocobo races, monster hunts that pit you against dangerous beasts, and even camping — which you have to do to bank experience points and level up. No matter what the activity, this new open-world approach feels like a huge step in the right direction for the Final Fantasy franchise. It helps build a sense of immersion that truly makes you feel for the world around you. But despite all this, nothing feels quite as good as fishing as Noctis.

No matter how you decide to pursue your adventure through Final Fantasy XV, you’ll be required to dabble in the secondary skills available to each of the heroes in your party. Prompto’s the photographer of the lot, Gladiolus the camper, and Ignis is the chef — leaving Noctis as the natural fisherman. Fishing is the only active secondary available to you, and it’s surprisingly complicated compared to what one might expect.

In Eos, you’re unable to fish wherever you want unfortunately, and are required to use one of the marked fishing locations scattered about the map. Once you’ve found a suitable pier you can start up the fishing mini-game and look at the mini-map to see where fish are swimming around Noctis. Yellow dots mark edible fish which can be used by Ignis for cooking, while blue are usually more prize-oriented catches — each equally contribute to your fishing skill, however, so it’s just a matter of preferences.

Once you pick a catch to go for, you’ll cast out and wait for a little red indicator to pop up with an audio cue to let you know a fish as their eye on your lure. When you’ve got some attention, slowly start reeling in, and try to get the fish to bite, at which point you’ll hook them by moving the left stick towards location displayed on screen. From here it’s a fight where you’ll have to manage your rod’s slack while trying to pull your catch in by following the prompts on screen without breaking the line. If you win, you’ll reel in your prize, and otherwise your rod’s line will snap.

At first fishing may seem relatively easy, but it’s actually possible to go on for awhile without getting a single bite because you’re using the wrong lure or reeling in the line too fast. That’s where the complicated bits start piling on.

Like the rest of the game, fishing comes with its own set of equipment. You’ve got a Line, Lure, Rod, and Reel, each of which help determine how effective you’ll be fishing your way through the water of Eos. Your line choice determines how long you can wrestle with a fish, your lure type affects which type of fish you can catch, your rod choice has a defense rating that will make your line last longer, and your reel handles how fast you can pull a fish in.

What’s great about this level of detail is that every piece of your fishing arsenal has its own limits, meaning that you’ll have to slowly learn how much you can handle while building up your fishing skill as Noctis. Weaker rods mean more finesse while fighting your catches, and a bigger collection of lures means you’ll have a greater chance to snag a bite. The fishing in FFXV evens goes as far to have certain fish appear during certain times of the day, although those seem to mainly be associated with the various fishing side quests available throughout the game.

The result is a pleasantly surprising and entertaining mini-game that pulls you away from the action-focused main narrative and into the peaceful world of fishing, which is a solid eight to ten hours filled with those moments that make Final Fantasy XV so great. It may seem a little trivial to relax for a bit and let Prompto take some ridiculous photos of your catches, but it’s a step away from the regular path worth pursing if you’re looking to master an additional aspect of FFXV.

More like this
Gaming
Jan. 27, 2023
Dirge of Cerberus is still the most incoherent Final Fantasy game ever
By Willa Rowe
Gaming
Feb. 1, 2023
The Best Video Game Ever Made Just Got Its Own Holiday
By Hayes Madsen
Gaming
Jan. 23, 2023
Everyone your main character can romance in Persona 4 Golden
By Hayes Madsen
LEARN SOMETHING NEW EVERY DAY.
Related Tags
Share: