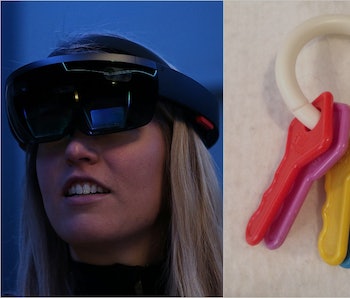 Ever gone to leave the house, only to realize you can’t find your keys? Microsoft has you covered. The tech giant has spent the past few years obsessing over augmented reality, and it’s invented a way to use its futuristic HoloLens goggles to scan a room and point to your keys.

The patent, published this month, describes a system that can track inanimate moveable objects automatically. It’s harder than it sounds: while object recognition has been possible for a while now, tracking a set of keys is a bit more difficult. It’s no good if the HoloLens recognizes a set of keys, it has to be the set of keys, else they won’t work with your door.

That sounds simple enough for people, but bear in mind babies struggle with this all the time. Without object permanence, an infant assumes an object has ceased to exist when it leaves its field of view, as it lacks the concept of objects moving around independently. If a computer can’t understand how an independent object moves around space, and how it stays the same object, it’s going to struggle to find your keys.

But the patent also lists a number of uses that recognize the absence of an object. For example, if there’s no milk in the refrigerator, the system should understand that it’s a sign the user needs to buy more milk. That way, an app could remind you when you’re at the store. Microsoft also notes other triggers that could activate reminders: if a user normally grabs their keys around 8 a.m., the system could start to remind them where they’re located before they even ask.

Microsoft also proposes a form of cloud-based key location sharing. If someone else in the house has moved the keys, and their AR kit recorded the movement, the two headsets could collaborate to get to the bottom of who moved it last.

It may take a while before the above scenarios come to life, though. The HoloLens is a pricey bit of kit aimed at developers and industry, and while Microsoft is working with third parties on the Windows Holographic interface, it’s safe to say augmented reality goggles have yet to hit the mainstream.

Previous attempts at normalizing AR vision also ended rather badly. Google Glass never quite got past the dorky tech nerd look, and once the pejorative term “glasshole” stuck, it seemed even less likely the company was on the verge of a breakthrough. In January, Google Glass’ social media went dark. Spectacles, a new set of glasses from the makers of Snapchat, have shown there may be a market for smart eyewear, but they lack the augmented reality sensors necessary for the likes of Microsoft’s patent.

It’s probably going to be a while before AR becomes such a ubiquitous part of our lives that this patent seems like something easily incorporated into everyday life, so until then we’re stuck trying to remember the last place we left our keys.