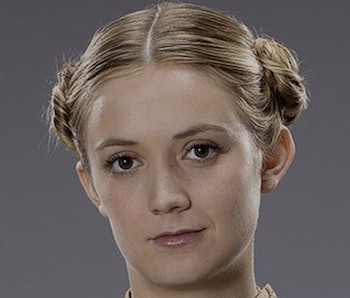 One member of the Resistance will return to Star Wars in Episode VIII, and this time, she’ll have a lot more to say.

Carrie Fisher’s daughter — Billie Lourd — had only one line in Star Wars: The Force Awakens in which she said “General, are you seeing this?” to Leia at the Resistance Base. But now, Lourd has revealed she has a larger role in Episode VIII.

Speaking to Build about her series Scream Queens, Lourd talked a bit about Star Wars and said, “Lt. Connix is back. You might not know her name, but should now.” Lourd said she has a bigger role in this film than in The Force Awakens, and she’ll probably have more than one line.

The actress also revealed she has been trying to popularize all sorts of phrases to get people to get more hyped about her Star Wars character and rattled off a few ideas: “Hooked on Connix, Connix-Con.”

Lourd also humorously commented that though she’s “really into Star Wars these days” she wasn’t as a fan as a child. “I don’t know if you guys would want to see your mom in a metal bikini,” Lourd said, “but it’s kind of scary as a child.”