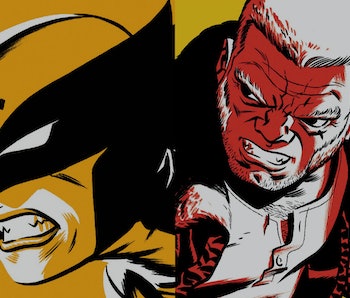 Wolverine was the best at what he does, until he wasn’t Wolverine anymore. In a busy year that belonged to frenemy Deadpool or to DC Comics with Harley Quinn and the Flash, Old Man Logan and “daughter” X-23 — who took on the Wolverine name in All-New Wolverine — did their own thing with some of the best writers alive in comics today. Here’s a brief overview of everything Wolverine — or different versions of that name — did in 2016.

Fans of the Earth-616 Wolverine had enough time to mourn since 2014’s Death of Wolverine. But the abstract notion of Wolverine never disappeared. Since the “All-New, All-Different” phase of Marvel in the fall of 2015, two Wolverine ongoing books endured during 2016: Jeff Lemire’s run on Old Man Logan, which places the parallel and much older Logan in the main Marvel Universe, and Tom Taylor’s All-New Wolverine in which X-23 takes up her “father’s” mantle and becomes the — well, all-new Wolverine.

In the new third volume of Old Man Logan, Wolverine wakes up in Earth Prime (Earth-616), mistakenly believing he only traveled back in time. After exchanging blows with the Totally Awesome Hulk and an old Steve Rogers (just before he earned back his youth), Logan winds up Canada’s remote Kilhorn Falls (issue #5) until Lady Deathstrike and the Reavers come looking for him. Then, in the five-part “The Last Ronin,” Logan is forced to team up with Lady Deathstrike against the Silent Order, a vicious band of warrior monks that made his life hell back in the Wasteland.

Now, in the ongoing “Monster War,” Jubilee is missing, forcing Logan to team up with the supernatural incarnation of the Howling Commandos in Romania. And in the latest issue #15, will confront the grandaddy of all monsters: Dracula.

In All-New Wolverine from Tom Taylor, Laura Kinney fulfills her destiny by taking over for the deceased, becoming the new Wolverine. In her ongoing series, Laura fights the Taskmaster and seeks the help of Doctor Strange and the original Wasp in her fight with the Sisters, additional clones of Wolverine from Alchemax. One of them, Gabby, is more innocent than the others, joining up with Laura in a way Laura will in the upcoming movie Logan.

Then, on the road to Civil War II, Laura crosses paths with Old Man Logan, and when Captain America gets involved, Laura and Gabby break away from the conflict completely. After the book’s crossover into Civil War II, it begins “Enemy of the State II” where Wolverine becomes a fugitive and heads to Madripoor, the southeast Asian nation where anything can happen. The last issue of the year, #15, was the third installment of the arc and was published early in December. It’s set to pick up again in 2017.

This year’s X-Men: Apocalypse came and went without much fuss, but easily one of its best scenes was the surprise appearance of Hugh Jackman’s Wolverine. Set in the ‘80s while Wolverine was the test subject of Weapon X, X-Men: Apocalypse gives Marvel fans a treat bringing Weapon X to life, straight from Barry Windsor Smith’s feature in Marvel Comics Presents.

Though it won’t be released until March 3, 2017, the trailer for Hugh Jackman’s final turn as Wolverine set the bar high for Logan when its trailer debuted this fall.