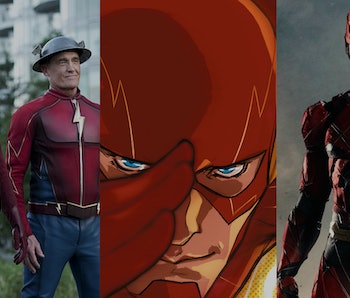 Pop culture truly felt the Speed Force in 2016. The red-hot runner of DC Comics, created by Gardner Fox and Harry Lampert in 1940, had a breakout year with a popular, game-changing TV series on the CW, two cameos in major Hollywood movies before his actual theatrical debut, and an ongoing comic book that’s playing an integral role in DC’s blockbuster continuity event, Rebirth. Never has there been a better time to rock a yellow lightning bolt.

On TV, Arrow may have started the CW’s interconnected superhero shows, but The Flash upped the scale with sci-fi concepts like multiverse theory and time travel, leading to an unprecedented crossover. “Invasion!” might not have been high art, but its ambition and imagination will leave a lasting impression on its youthful and youth-thinking audience than any prestige series possibly could. In comics, The Flash continued to be The Flash while organically modeling itself after the TV show, whereas on film, the Flash made his presence known as a confusing “Easter egg” that was as subtle as a sonic boom.

Here are all the ways the Flash bent the world to his will in 2016.

The beginning of the calendar year 2016 was the back half of The Flash Season 2, which compelled viewers to come up with theories en masse involving the identity of the Flash’s biggest bad yet, Zoom. The rush to solve the puzzle was one of the show’s high marks, and while The Flash continues to be a dependably entertaining TV series, it’s hard to deny it may have plateaued. Helluva a high plateau, though.

Also, who could forget when he became BFFs with Supergirl?

From the summer and into the fall, The Flash became wrapped in its newest gimmick, Flashpoint, in which Barry Allen (Grant Gustin) went back in time to rewrite his history, causing ripple effects across the universe. His friends in Arrow and DC’s Legends of Tomorrow have been affected, but now it’s up to the Flash to learn the responsibilities of possessing the Speed Force. In his newest foe, Savitar, Barry will really learn what it means to mess with time.

In comics, Barry Allen is at the center of Rebirth, a long-term plan for DC canon. Where has Wally West been all this time? Why was he sucked in and spat back out? Who is pulling all these strings? The DCU isn’t ready to tackle these questions yet, but until they do, Barry Allen has not only reunited with Wally West, but is playing mentor to a new, younger Wally who is just learning to grasp his newfound abilities in the Speed Force.

But away from Rebirth, Barry met his most personal enemy yet: Godspeed. When a not-insignificant population of Central City gain super speed, one of them is August Heart, a cop at Central City PD and a friend of Barry’s. When August gets super speed, he vengefully pursues his brother’s killers who were freed from murder charges. Exacting vigilante vengeance, he crosses paths with his own pal Barry in one of The Flash’s most significant arcs in recent memory. As 2016 comes to an end, Barry and Wally are trapped in the Shadowlands to help Shade search for something he’s missing.

While Grant Gustin is TV’s favorite Barry Allen, Ezra Miller has become the one to flesh him out on the big screen. Before next year’s Justice League and his own solo film in 2018, the Flash appeared in cameos in Batman v Superman: Dawn of Justice and Suicide Squad.

In Dawn of Justice, Barry appeared in a dream of Bruce Wayne’s (Ben Affleck), warning Bruce he was “right about him” and that Lois Lane (Amy Adams) is the key. Bruce mistakes Barry’s words for why he should fight Superman (Henry Cavill), but Barry was actually talking about someone else. In Suicide Squad, the Flash appears for a brief second to arrest Captain Boomerang (Jai Courtney) in the film’s opening prologue. “No honor among thieves, eh?” he snarks before disappearing. We’ll see him again very soon.