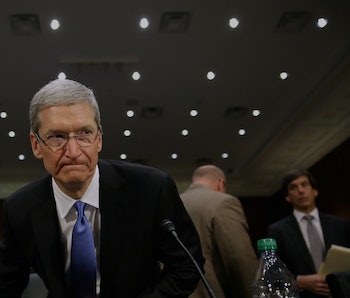 When the Supreme Court ruled in favor of Samsung over Apple, it ended the South Korean company’s five-year-long legal battle over 11 phones that lower courts ruled as violations of Apple’s design patents. But on Tuesday, the nation’s highest court determined that Samsung should not be subject to an 1887 law that would require it to surrender all profits from infringing devices to Apple and, instead, has sent the case back to a lower court in order to determine final damages.

The ruling is seen as a victory for innovation by a number of technology companies and advocacy groups.

Curved rectangles got us into this mess

In 2011, Apple sued Samsung for using design elements of its patented iPhone design. The curved rectangular corners and a grid icon display were serious points of contention. Lawyers for Samsung argued that because the design elements were just one component of an otherwise complex and original device, it didn’t owe Apple all its phone entire profits. A U.S. Circuit Court sided with Apple in 2012, hitting Samsung with over $1 billion in penalties and an injunction on future sales. A series of appeals followed; eventually Samsung paid Apple $548 million in December 2015.

That’s when Samsung took the matter to the Supreme Court, arguing that it should not be required to pay $399 million for copying features including the rounded-corner font and grid icons:

The tide began to turn in Samsung’s favor when in February a Federal Circuit U.S. Court of Appeals overturned a decision requiring Samsung to pay $120 million to Apple in a separate infringement case. Tuesday’s ruling, which ruled unanimously 8-0 against the use of total profits as a means of repayment, was by far the biggest victory for the company against Apple.

Samsung told Reuters in a statement the ruling was a “victory for Samsung and for all those who promote creativity, innovation and fair competition in the marketplace.”

Why is Silicon Valley so invested in this case?

Tuesday’s ruling was the first time since the 1800s the Supreme Court considered a patent design case and, needless to say, the state of American invention has changed a lot since then. The trial reflects the increasing divide between Silicon Valley innovators and traditional retail companies. Google, Facebook, Dell, HP and eBay were just a few technology companies that filed a petition to the Supreme Court in January requesting that it hear Samsung’s appeals case.

Organizations like the Computer & Communications Industry Association and the Internet Association, which represents companies like Uber and AirBnb, also came out to support Samsung.

“This was a pivotal court case for the technology industry and it is encouraging to see the law interpreted and applied in a way that makes sense in a modern era and protects both inventors and innovation,” Ed Black, CEO of the Computer and Communications Industry Association, said in a statement.

On Apple’s side were mostly fashion retailers whose likelihoods depend on design patents — Nike, Crocs, and Oakley. Not unlikely bedfellows for a tech company that once tried to patent a paper bag.

The Supreme Court ruling doesn’t give patent infringers total immunity, but it is a huge step in acknowledging the complexity of technological devices and how patent law could begin to address innovation in the modern world. While several lawmakers have initiated legislation to reform the centuries-old patent laws ruling Silicon Valley today, advances have been stalled by political disagreement in both parties.

“It’s not the end of that litigation but it’s the end of many company’s worse fears related to this case,” Florian Mueller, a patent activist based in Germany, tells *Inverse. “On that basis anybody who would have been threatened by design patent litigation would have faced an incalculable economic risk.”

However, it’s hard to predict what the political landscape will look like for businesses under a Trump presidency and Supreme Court nominee. While the president-elect has already expressed his opposition to net-neutrality, he’s been relatively mum on intellectual property. The official GOP platform advocates for strong intellectual property enforcement. Trump is set to meet with technology leaders on December 14.

What does it mean for consumers?

While this five-year battle has important implications for the tech world, there hasn’t been much of an impact on consumers of either brand. Samsung eventually took the 11 devices in question off the market and the company hasn’t struggled to sell other phones — last year it saw its U.S. sales increase. And while the company might be itching to get back the $382 million it currently owes to Apple, even losing in the lower courts isn’t likely to topple the company, which has a $216 billion market value.

Barring a settlement — which seems incredibly unlikely — the case will now be kicked back to a lower court to decide how much Samsung owes Apple. In its ruling, the Supreme Court did not provide any guidance as to how the lower court should decide damages. The two companies also have a separate ongoing legal battle in California.

“We will continue to protect the years of hard work that has made iPhone the world’s most innovative and beloved product,” Apple said in a statement to the press after the trial. “We remain optimistic that the lower courts will again send a powerful signal that stealing isn’t right.”