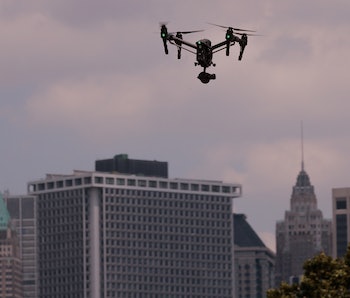 Apple may be good at a lot of things, but it has really struggled with maps. Because it’s 2016, the company thinks the answer might lie in a fleet of mapping drones and some new software that would let it reconstruct the inside of major buildings.

Since launching Apple Maps four years ago, the company has long struggled to create a product that could compete with Google Maps. But all that might change soon. According to an unconfirmed report in Bloomberg, the company will start using drones to beef up its map representations of roads and streets.

With drones, Apple Maps will be able to cover much more ground than if it was simply relying on the fleets of camera-equipped cars and vans it currently uses. While both Google and Apple use ground vehicles with cameras to collect data for their systems, the method isn’t always an effective strategy for more remote areas.

In July, residents of the Faroe Islands took to using sheep to create their own mapping system and encourage Google Streetview to visit the territory. It worked — Google eventually visited the Island in August.

And given Federal Aviation Administration regulations outlined in August, it’s most likely that it’s only going to be remote locations like Faroe Island that will benefit from drone scouting. In the United States, Apple will have to follow FAA regulations which still restrict flight over people and buildings — aka what most cities are made of — for commercial use.

More than just enhancing its outdoor maps, Apple is reportedly advancing an indoor mapping system for public places like museums and airports, though that probably won’t involve drones whizzing by your face.

Apple’s initial FAA request stated that it will use several different brands of drones to collect data, so there’s no indication that the move is a push by Apple into the drone business.

The new map features should be available to users starting in 2017.