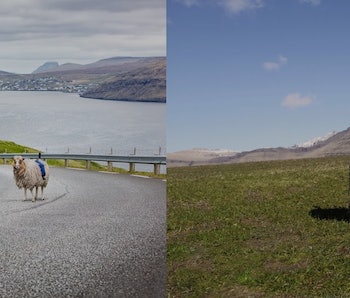 In early July, Faroe Islands citizens, fed up with Google’s noncooperation, started attaching 360 cameras to some of their 70,000-odd sheep to map the islands themselves. On Wednesday, Google — sensing a PR win, no doubt — announced that it had quietly sent Street View rigs to the Faroe Islands (Denmark’s version of Puerto Rico) to bolster its “Sheep View.”

There are 18 Faroe Islands and just under 50,000 citizens, but it looks like quite the tourism destination. Street View would enable foreigners to salivate and dream of a breathtakingly scenic vacation, and to explore the islands in virtual space before packing their bags and hopping on the next flight. But Google wasn’t taking the bait, so Faroe Islands resident Durita Andreassen started attaching bulky, solar-powered camera rigs to intrepid sheep. Soon enough, she had Sheep View up and running, and the internet, as it tends to do, caught wind of it.

Now, Google’s legitimized Sheep View, shared its own side of the story (replete with sheep puns galore), and sent a Trekker 360 camera rig along with several loaner cameras to these North Atlantic Ocean islands. Andreassen is thrilled:

GOOGLE IS HERE. It happened. They are finally here! I went down to the airport to greet them. They brought their cameras and everything! They heard our story and they are here to help us make Street View.

Together with Google, we have decided to continue making our own version of Street View. Instead of using their cars, Google has provided us with cameras, a Google Trekker and lots of support. We have come to love our Sheep View so much that instead of replacing it, we have expanded the fleet of cameras. Now we can make Street view with sheep, bikes, backpacks, ships and even a wheelbarrow. So if you want to help, just come by our Visit Faroe Islands office in Tórshavn or stop by Atlantic Airways in Vgar Airport and we will lend you a camera.